Thousands of Women March with Dilma Rousseff for Democracy in Brazil 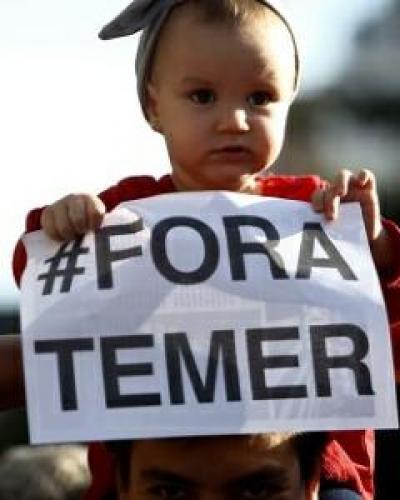 Brasilia, June 3 (RHC)-- Suspended Brazilian President Dilma Rousseff took to the streets in Rio de Janeiro Thursday along with thousands of women to reject the installed interim government of Michel Temer, strongly criticized by protesters as a coup regime.

The march of "Women for Democracy and Against the Coup" in Brazil brought thousands to the streets to resist the unraveling of social gains threatened by Michel Temer.

Speaking to the rally, Dilma Rousseff said: “What unites us here is the democracy of our country, which was gained with much struggle.”  She went on to say that a series of leaked recordings have solidified the fact that the plan to remove her from office was, in fact, a parliamentary coup.

The suspended president also emphasized the “crucial” role of women in democracy, criticizing Temer’s cabinet for representing a small elite group.  She said: “A government of old and white men does not represent the diversity of our people.”

Dilma Rousseff warned that Brazilians face the threat of a rollback of important social achievements under the installed interim government.  In just three weeks in office, despite being an interim and not a permanent or elected president, Temer has moved swiftly to cut back what he calls a “bloated” state.  He axed key ministries and has promised to cut social spending while promoting privatization of Brazilian resources and increased access for foreign corporations.

Unions have called the removal of Rousseff a "coup against the working class," while the former head of the now-defunct Ministery of Women, Racial Equality, and Human Rights, Nilma Lino Gomes, labeled it a multidimensional coup with gender, race, and class consequences.