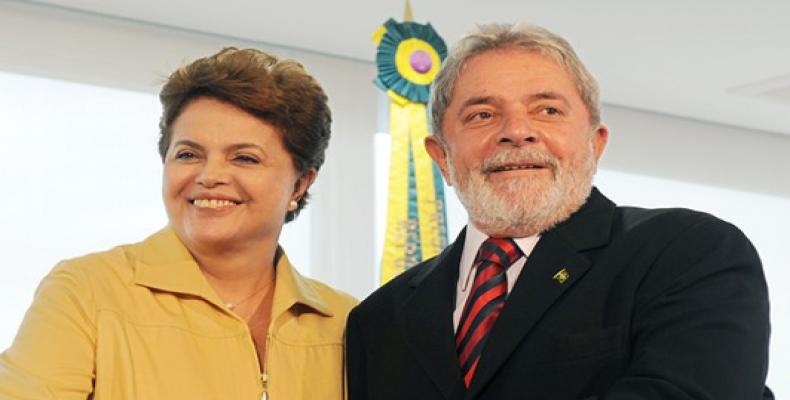 Brasilia, July 2 (RHC)-- Suspended Brazilian President Dilma Rousseff said Thursday that former president and leader of the Workers Party, Luiz Inacio Lula Da Silva will be a candidate for the next presidential elections in 2018.

She argued that the coup organized by the right-wing elites against her was mainly motivated by Lula's probable candidacy.  Dilma told the French daily L'Express: “Today, despite all the attempts to destroy his public image, Lula remains one of the most beloved personalities in the country.”

Lula has repeated on various occasions that the more he faces attacks, the more likely he will run for president in 2018.  He is under investigation as part of a corruption probe, for alleged crimes linked to the Petrobras state oil bribery and fraud scandal.

Rousseff also reminded L'Epress that she had not committed any crime, and that many of her predecessors had to resort to the budget manipulations that she was accused of in the impeachment procedure.

Dilma Rousseff got a boost in her fight against impeachment Monday as a report prepared by analysts in the Senate found that there is no evidence to suggest she was personally responsible for fiscal wrongdoing.  It remains unclear, however, how the findings will impact the impeachment process that has hinged on such allegations and has now been delayed until August 26, after the Rio Olympics.