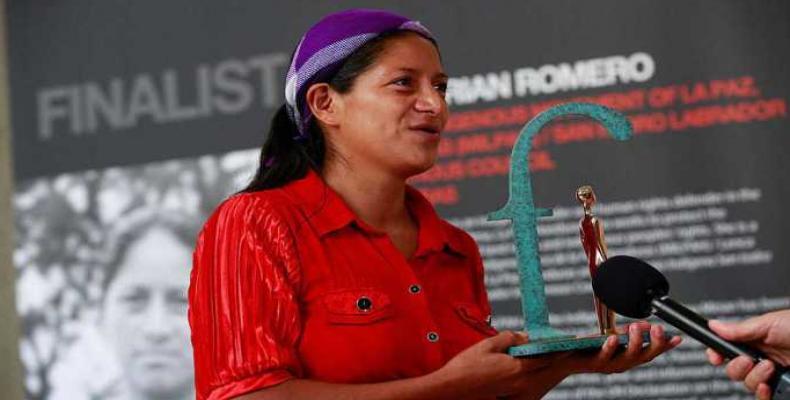 Dublin, June 13 (RHC)-- Ana Mirian Romero, a Honduran Indigenous rights activist who has suffered repeated attacks, harassment, and death threats since joining her community’s land struggle in the wake of the 2009 U.S.-backed coup has been recognized for her commitment to fighting for human rights with the annual international Front Line Defenders Award.

Following a ceremony in Dublin, Ireland, Ana Mirian said that the award "will serve as a source of courage and strength to continue in the struggle and not get discouraged.”

Ana Mirian Romero is a Lenca woman who has worked for years through local Indigenous organizations in the western Honduran department of La Paz to protect her people’s traditional territories and natural resources in the face of an unwanted hydroelectric dam that threatens to displace communities and destroy their livelihoods.

The Front Line Defenders Award is an annual prize that honors outstanding work — often with personal risks — in the protection and promotion of human rights.  Romero’s Lenca Indigenous Movement of La Paz, also known as Milpah, has struggled against the Los Encinos hydroelectric project. The dam was approved without permission from the affected community in violation of their internationally-recognized right to free, prior and informed consent as Indigenous people.

The organization is a sister movement of the Lenca struggle led by internationally-renowned activist Berta Caceres, murdered over three months ago after fighting to defend the environment and Indigenous rights for over two decades.  For Ana Mirian Romero, her murder is a tragic loss, but it has also sparked global outrage and brought needed international attention to the human rights crisis in Honduras.