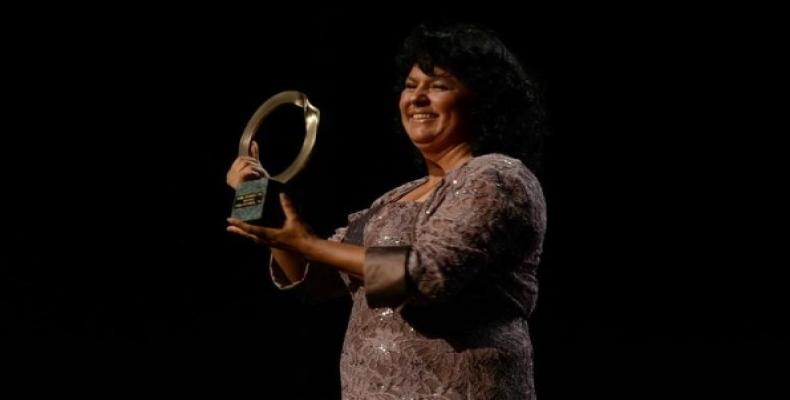 Tegucigalpa, April 22 (teleSUR-RHC)-- Berta Caceres, an indigenous activist and human rights defender, was awarded the prestigious Goldman Environmental Prize for South and Central America on Monday for her contribution to the struggle against an unwelcome dam project in Honduras.

“It is an honor, and an acknowledgment of the enormous sacrifice and commitment made by COPINH and its planetary contributions,” Caceres told The Guardian newspaper. Caceres rose to prominence as the co-founder of the National Council of Popular and Indigenous Organizations of Honduras (COPINH) and was a candidate for vice president in national elections before a 2009 coup broke the constitutional order in the country. Her ticket chose to stand down in the face of illegitimate elections and a U.S.-backed conservative regime later took power.

The government pursued a development strategy that deliberately set out to court transnational companies to build hydroelectric projects and open mining operations. One such project was the Agua Zarca Dam. Residents near the project turned to Caceres and COPINH to help them stop the construction of the dam, which was being done without consent from the affected communities. Caceres, together with community members from Rio Blanco, led a campaign to halt construction of the dam. Despite overwhelming opposition from the community, the government proceeded with the development of the dam, forcing community members to set up a road blockade. That blockade succeeded in halting construction, though not without a price.

Caceres and other community leaders faced threats of violence from state forces, as well as the company behind the project. Community leader Tomas Garcia was shot and killed during a peaceful protest in 2013.

In response to community opposition, a major partner in the dam project pulled out in 2013. One of the project's funders, the International Finance Corporation – the World Bank’s private sector lending arm – also pulled out citing human rights concerns.

The announcement declaring Caceres as the winner of the Goldman prize coincides with the release of a report by Global Witness, which declared Honduras as the most dangerous country in the world for environmental and land activists. Caceres told the Guardian that she hopes this award will bring more attention to the threats against environmental and social activists in Honduras.

“The Honduran people, along with international solidarity, can get out of this unjust situation, promoting hope, rebellion and organizing ourselves for the protection of life,” said Caceres.