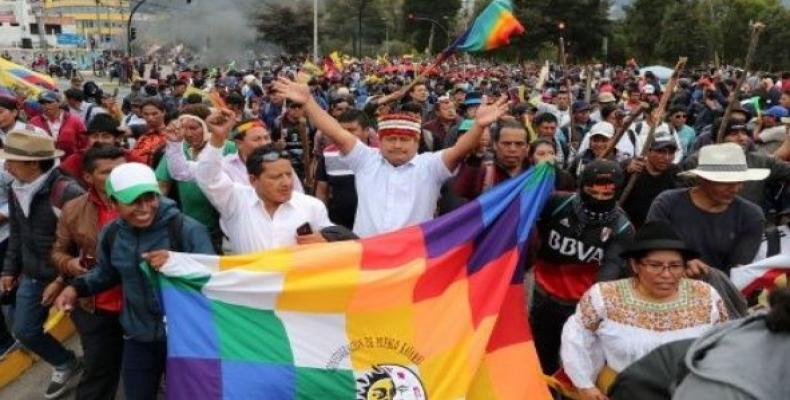 Quito, October 28 (RHC)-- The Confederation of Indigenous Nationalities of Ecuador has announced that it will file a legal complaint against the State of Ecuador for violating the human rights of Indigenous leaders during the anti-government protests that rocked the country for at least 12 days.

In a statement published on Twitter, the organizations part of the CONAIE said that the complaint will be filed before national and international courts.  They also demanded the State to be accountable for the excessive use of the force by police forces against protesters, causing many deaths and severe injuries.

Denouncing what they called "political persecution," they demanded the release of the people arrested during the protests and compensations for the victims.  "We will stay firm in demanding the ministers María Paula Romo and Oswaldo Jarrín to resign, who we consider as responsible for the massacre against the Ecuadorean people."

Last Thursday, the CONAIE announced that the Inter-American Comission of Human Rights (IACHR) opened an investigation regarding the protests and the police and military repression that followed.  A delegation is visiting Ecuador from October 28th through the 30th.

The protests started after President Lenin Moreno removed the subsidies on fuel, automatically raising fuel prices across the country.   The measure was linked to commitments under a $4.2 billion loan agreement between the Moreno administration and the International Monetary Fund (IMF), which Indigenous leaders and other opponents decried as a betrayal to the nation.