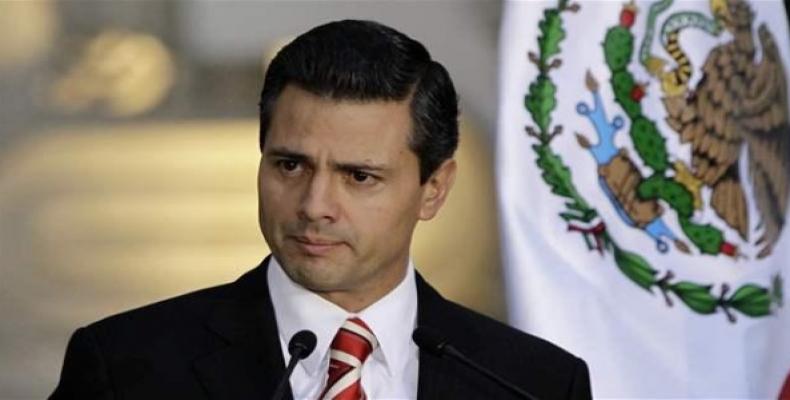 Mexico City, June 25 (RHC)-- Mexican President Enrique Peña Nieto vetoed a package of anti-corruption bills on Thursday, asking Congress to change a measure that would have forced people or firms who receive government funding to publicly disclose their assets.

Humberto Castillejos, the president's legal adviser, said the measure was also too broad in requiring regular citizens, including foreigners, to publicly disclose such information.  But he did not mention other measures in the bill, which would increase fines and jail time for public officials convicted of bribery, embezzlement and illegal enrichment as well as create an independent anti-corruption prosecutor.

The veto came just days after the Peña Nieto met with business leaders in the presidential residence, known as Los Pinos, the Mexican daily La Jornada reported. The package of anti-corruption laws passed through the Congress last week.

But Peña Nieto’s Institutional Revolutionary Party, or PRI, blocked a measure in the bill that would have required elected politicians and other public officials to reveal their assets, taxes and potential conflicts of interest.  A last minute amendment to the provision made such disclosure voluntary and eliminated advertising dollars from the list of disclosures, the publication Animal Politico reported.

Peña Nieto’s government has been embroiled in several corruption scandals, including accusations of conflict-of-interest, turning a blind eye to fraud and vote buying in the presidential election. The president was also implicated in the Panama Papers through his personal friend and so-called “favorite contractor” Juan Armando Hinojosa.

The veto also comes as protests in solidarity with striking teachers fighting neoliberal education reforms and government repression rock the country.  The president plans to ask Congress for an extraordinary session to discuss changes to the bill.