Mexican Activist Says NAFTA Should Act as a Warning Against TPP 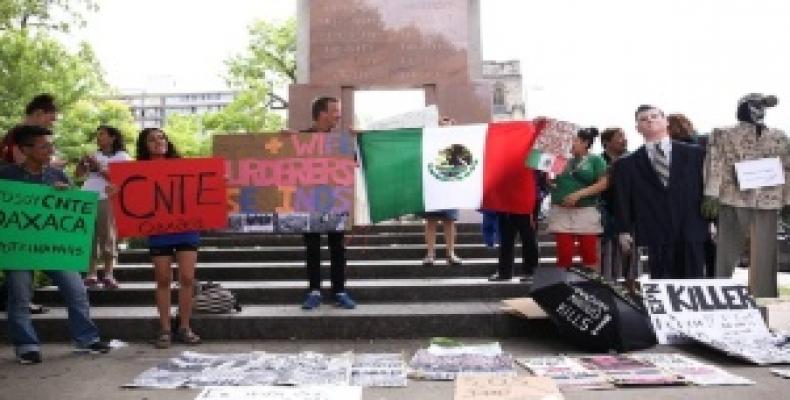 Mexico City, July 1 (RHC)-- The heads of government from Mexico, Canada, and the United States gathered in Ottawa for the "Three Amigos" Summit in order to push trade liberalization, and specifically the TPP.

Mexican President Enrique Peña Nieto, Canadian Prime Minister Justin Trudeau, and U.S. President Barack Obama were forced to defend free trade in light of renewed debate about globalization after the surprise result from the U.K. referendum that saw voters narrowly vote to leave the European Union, as well as critical comments about free trade pacts from Donald Trump, the presumptive Republican nominee for the U.S. presidency.

The three countries are already united through the North American Free Trade Agreement, better known as NAFTA.  But the “Three Amigos” made a renewed pitch for the approval of another similar deal, the Trans-Pacific Partnership, or TPP.

The deal is highly controversial, with opponents warning that it is designed with the interests of transnational capital in mind and will only lead to greater misery and inequality.  However, the impact of free trade agreements on workers, campesinos, and low-income people is nothing new to Mexico, which has seen poverty and inequality grow significantly in the 22 years since NAFTA came into effect.

Victor Suarez Carrera, currently in Canada to take part in demonstrations during the “Three Amigos” summit and meet and with social movements opposed to the trade deal, told teleSUR that the TPP is a “strengthened NAFTA” that “will grant more rights to transnational capital.”

Suarez, who works with the group Mexico Better Off Without the TPP, says that NAFTA should act as a warning of the impacts of these kinds of trade deals.  “Before NAFTA, Mexico was a developing country. But now it’s an under-developing country, with 70 percent of people in rural areas and 85 percent of the Indigenous population living in poverty,” said Suarez.