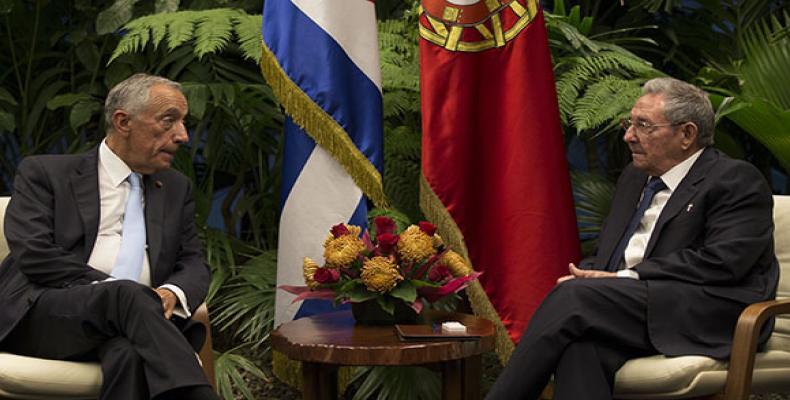 Havana, October 27 (RHC)-- Cuban President Raúl Castro met Wednesday afternoon in Havana with his Portuguese counterpart, Marcelo Rebelo de Sousa, who concluded a two-day state visit to Cuba on Thursday. The two leaders reviewed the state of bilateral ties, which they both described as 'very positive.'

During the cordial exchange, President Raúl Castro and his Portuguese counterpart agreed to expand cooperation ties in such sectors as the economy, trade and investment.

Prior to his meeting with the Cuban head of state, the Portuguese dignitary was received by Revolution leader Fidel Castro, with whom he discussed the friendship ties that unite the peoples of Cuba and Portugal, as well as various topics on the international agenda.

Rebelo de Sousa commented on Cuba's victory at the UN General Assembly's vote on the U.S. blockade. He reaffirmed Portugal's long standing position in favor of Cuba and against Washington's arbitrary policy, particularly its extraterritorial nature.

Fidel Castro thanked the Portuguese leader for the support the European nation has shown Cuba, in term of the U.S. blockade and in the framework of relations between the Caribbean state and the European Union.