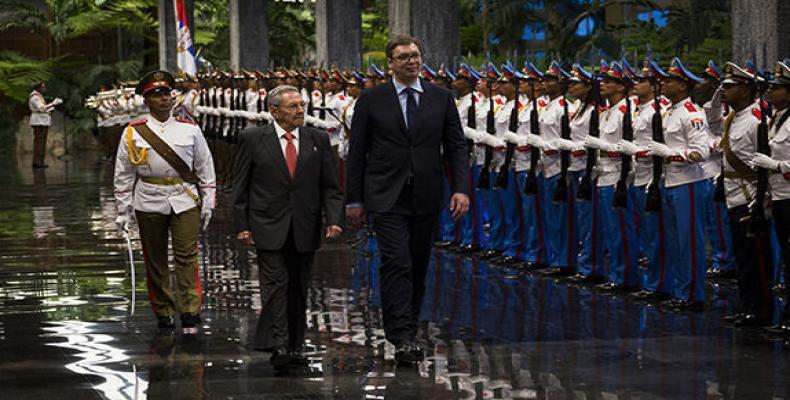 Havana, December 15 (RHC)-- Cuban President Raúl Castro met Friday in Havana with his counterpart from the Republic of Serbia Aleksandar Vucic, who is here on an official visit.

Prior to his meeting with the Cuban head of state, the Serbian leader paid homage to National Hero José Martí at Havana's Revolution Square.

During a ceremony Thursday evening at the University of Havana, the Serbian leader said the aim of his visit is to strengthen friendship and cooperation ties between the Balkan nation and the Caribbean state.

The European leader noted that despite the geographical distance the Serbian and Cuban peoples have much in common and stressed that both peoples are strong promoters and defenders of such high principles as independence, sovereignty and freedom.  He further expressed his personal admiration for the historic leader of the Cuban Revolution Fidel Castro.

Also on Thursday, the visiting Serbian dignitary held talks with Cuban Parliament President Esteban Lazo and toured the Havana-based International Press Center, which is featuring a photo exhibition entitled: 'Fidel and the Foreign Policy of the Cuban Revolution,' dedicated to the Cuban revolutionary leader.