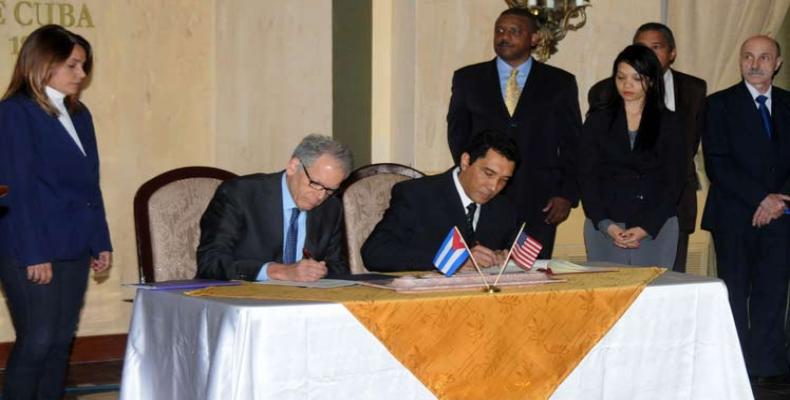 Havana, January 10 (RHC)-- Cuba and the United States have signed an agreement on responses to spills of oil and other potentially hazardous substances in the Gulf of Mexico and Florida Straits.

Jeffrey DeLaurentis, chargé d'affaires at the U.S. Embassy in Havana, stated that the document represents another step forward in mutually beneficial collaboration. He said: “Establishing a joint framework which includes diplomatic, technical, and legal elements in order to prepare for and respond to oil spills which occur at sea, is very important for neighbors located roughly 90 miles from one another.”

Deputy Minister of Development at the Cuban Ministry of Transport, Eduardo Rodríguez, noted that the accord will lead to the development of a Coordination Plan covering prevention, preparation, and response to any eventual spill of oil or other potentially hazardous substances in the area.

He further said the new accord represents a positive step forward and contribution to the ongoing process to improve U.S.-Cuba relations.

The Cuban senior official insisted though that Washington's nearly six-decades old policy of blockade against Cuba continues to be the main obstacle to the effective implementation of security measures outside of Cuba’s Exclusive Economic Zone in the Gulf of Mexico and also negatively impacts both countries’ ability to effectively respond to oil-spills in the area.

Cuba has signed similar agreements with other States in the Gulf of Mexico and Caribbean region.