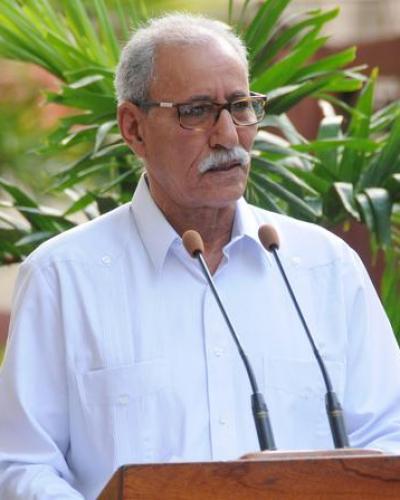 Havana, May 26 (RHC)-- Cuban President Raúl Castro met Friday in Havana with his counterpart from the Sahrawi Arab Democratic Republic, Brahim Ghali, who arrived in Havana Thursday evening for an official visit.

During his stay in Cuba, President Ghali will pay tribute to National Hero José Martí and will be hosted by the Cuban Friendship Institute, among other activities in his schedule.

Cuba has sent doctors and teachers to the Sahrawi Republic. The Caribbean state has also trained professionals from the Arab nation, mostly in the field of health-care and related specialties.

In statements to the press upon arriving at Havana's José Martí International Airport, the Sahrawi president expressed satisfaction with this visit.

“It is a very happy coincidence that I begin my visit to Cuba, a brotherly country, an ally, a brotherly people, as we mark the International Day of Africa, on May 25.

“For me it is a pleasure, a great honor to step on the free soil of Cuba, as we have always believed, as we have always felt, be us here or far away there. I want to convey my warmest greetings to the Cuban people, and tell them that Africa is very proud of Cuba.”