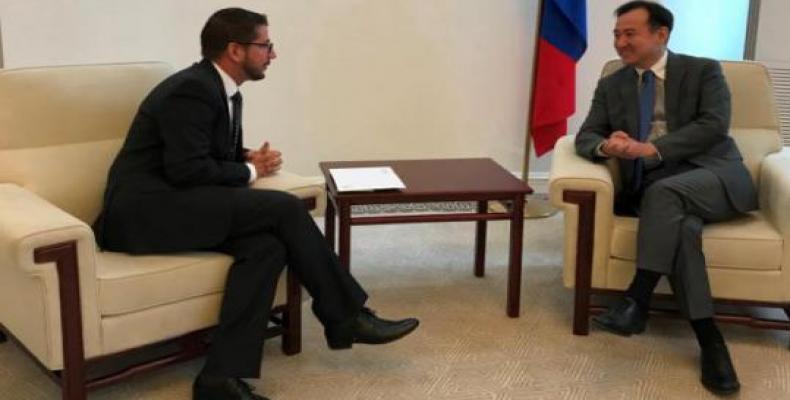 Ulaanbataar, October 26 (RHC-Minrex)-- The Hon. Mr. D. Tsogtbaatar, Mongolia's new Minister of Foreign Affairs, held a meeting Wednesday with Cuban Ambassador Raúl Delgado Concepción. At the meeting the Ambassador of Cuba congratulated the Minister on his appointment to the head of the Mongolian Foreign Ministry and expressed his satisfaction at the good state of the political relations between the two countries, which have maintained diplomatic relations for 57 years.

The meeting dealt with the main aspects of relations between the two countries. The Cuban diplomat gave the Minister a letter sent by his counterpart, Cuban Foreign Minister Bruno Rodríguez Parrilla, in which he appreciated the constant support given by Mongolia to Cuba in its battle for the elimination of the criminal policy of economic, commercial and financial blockade maintained by the United States of America for more than five decades. On November 1, Cuba will submit a resolution condemning this policy against our people for the 26th time in a row to the General Assembly of the United Nations.

The meeting reviewed the state of economic relations between the two countries, and the ways to be able to promote them to mutual benefit. The cordial atmosphere in which the meeting took place showed the excellent ties of this relationship.