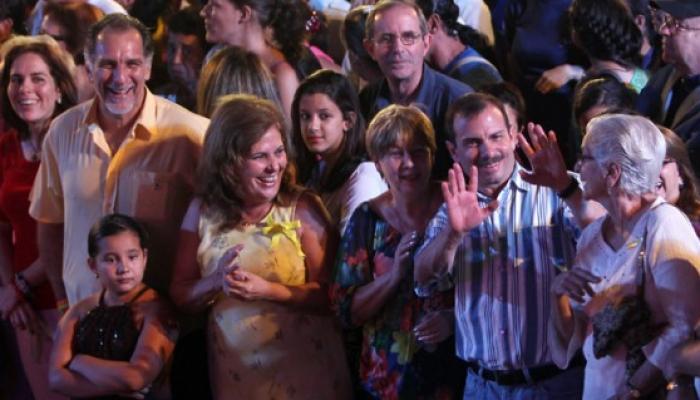 Havana, March 2, (RHC) Fernando Gonzalez, one of the five Cuban antiterrorist fighters imprisoned in 1998 in the United States, and who was the second of them to return home on Friday, thanked the Cuban youths for their permanent support of their cause, during a music concert launched Saturday evening at the stairs of the University of Havana.
The concert was dedicated to Fernando Gonzalez, who was there with his relatives, to Rene Gonzalez, who returned to the island in 2013 and is also on the picture with his family, as well as Antonio Guerrero, Ramon Labanino and Gerardo Hernandez, the three who are still serving unfair sentences in US prisons.
The Cuban Five, as they are known around the world, were arrested and given extremely long sentences in 2001 by a biased Miami-court, after they monitored Florida-based violent organizations that planned terrorist actions against Cuba.
Addressing the packed audience on the historic stairs of the university, just before the opening of the concert, Gonzalez said he trust the perseverance and support of the Cuban people till the other three anti-terrorists return home.
He also thanked president Raul Castro and Cuban authorities for the warm welcome home and he described the Cuban youth as followers of the work of Revolution leader Fidel Castro.  Gonzalez also thanked the musicians that participated in the concert.