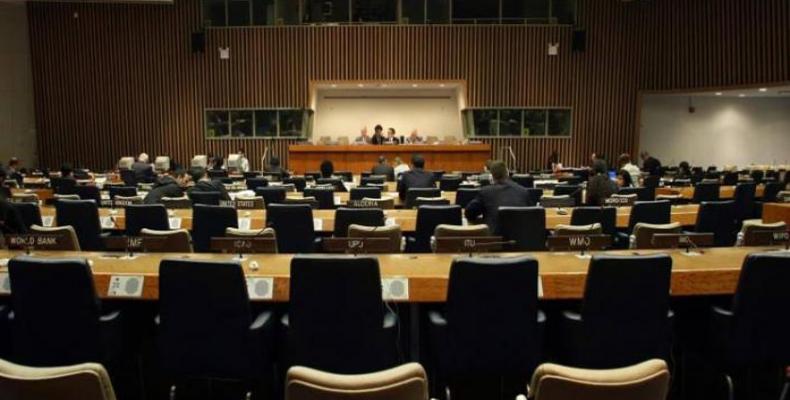 On Monday, the Cuban diplomat spoke before the UN Special Committee on Decolonization, reiterating Puerto Rico's inalienable right to self-determination in accordance with General Assembly Resolution 1514, on the granting of independence to colonial countries and peoples.

In a draft resolution adopted by consensus, the Special Committee once again urged the United States to assume the responsibility of promoting a process that allows Puerto Rico to take sovereign decisions to address its urgent economic and social needs.

Promoted by Cuba, Nicaragua, Venezuela, Ecuador, Russia and Syria, the text was added to the 36 resolutions and decisions on Puerto Rico adopted by the Committee since 1972.

A press release on the UN news site highlights that this year’s document refers to the devastation caused by Hurricanes Irma and Maria in 2017, which exacerbated unemployment, marginalization and poverty, in addition to aggravating problems related to education and health.

The resolution calls on the General Assembly to comprehensively examine the question of Puerto Rico and decide on the issue as soon as possible.

According to the resolution, the United States must guarantee the protection of the human rights of the Puerto Rican people, and to return the territory occupied by its military bases, in particular the Vieques and Ceiba islands, and to assume the costs of cleaning and decontamination of these areas.

The text also expresses concern about actions carried out against pro-independence activists and calls for rigorous investigations.

The first speaker was former political prisoner Oscar López Rivera, who highlighted the accelerated depopulation of Puerto Rico, to the point that there are just over three million people on the island and over five million have migrated to the United States.

He highlighted the high number of professionals and young people who have left the island in search of employment and a better future. He reiterated his criticism of the Fiscal Control Board, which manages the finances of the government of Puerto Rico and orders the austerity measures to be implemented.

Oscar López Rivera expressed his hope that the General Assembly take up the case of Puerto Rico, as the only body with the power to end colonialism.