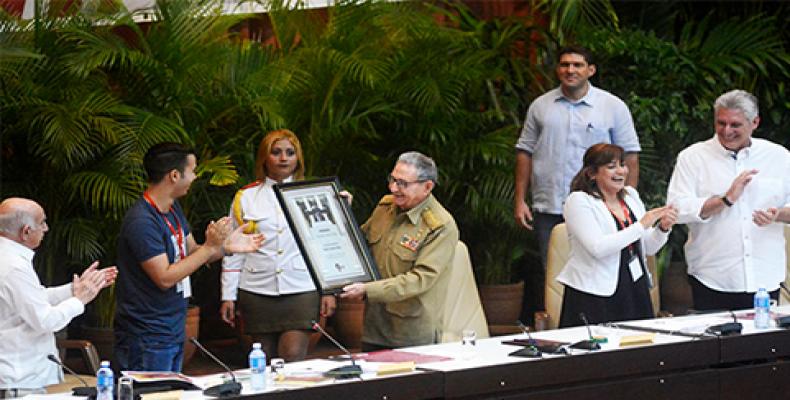 Havana, July 9 (RHC)-- The 9th Congress of the University Student Federation (FEU) ended in Havana Sunday with the presentation of the newly elected national secretariat and the acknowledgement of the historical leaders of the organization. The closing session was presided over by the first Secretary of the Cuban Communist Party, Raul Castro, and president Miguel Díaz-Canel.

Raúl Alejandro Palmero, was re-elected president of the University Students Federation. He delivered the official declaration of the event, which highlighted the role of Cuban university students as worthy heirs of the history of the island and guarantors of the continuity of the Revolution and the improvement of Socialism.

The document also declared that the Cuban youth will continue to be faithful to Fidel Castro's ideas, preserve the Revolution´s achievements and support the leadership of the socialist state.

The oldest youth organization in Cuba presented its highest distinction, the Alma Mater Award, to Raúl Castro Ruz and José Ramón Machado Ventura, in recognition of their important contributions to the island´s revolutionary `process.

The Second Secretary of the Central Committee of the Cuban Communist Party, José Ramón Machado Ventura delivered the closing remarks. During his speech he acknowledged the ability and willingness of young Cubans to respond to their commitment to give continuity to the materialized dream of Fidel Castro and Jose Martí.

The meeting brought together some 400 delegates from universities across Cuba, in representation of their more than 125,000 peers island-wide.