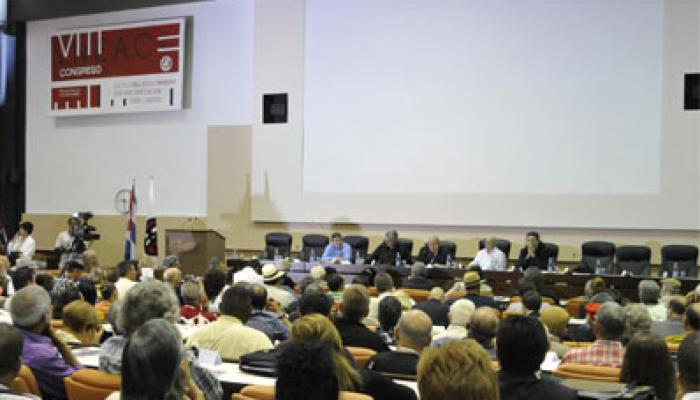 Havana, Aprl 14, (RHC), – Also on Saturday, Cuban President, Raul Castro, attended the closing session of the 8th Congress of the Union of Writers and Artists of Cuba (UNEAC).

During the closing speech of the Congress, held in Havana’s Convention Center, Raul congratulated the delegates, mostly prestigious creators and intellectuals, for the rich exchange that took place during the two days of the event.

He recognized the importance of individual opinions, though there were “statements with which I disagree, but which I respect," he said.

He asked participants to use forums like this to vent their disagreement, instead of hallways. “It is necessary to maintain unity, and work towards viable solutions for all these issues, so that they do not repeat themselves in the next edition of this conclave,” he said.

The problems encountered here have to be carefully studied, to find a suitable solution that is approved in the most democratic way possible, he said while stressing that to discuss and analyze things with patience is the best way to reach consensus.

The closing session of the Cuban intellectual's gathering was also attended by Miguel Díaz-Canel, member of the Political Bureau of the CPC and First Vice President; Foreign Minister, Bruno Rodríguez; Abel Prieto, Advisor to the President of the Councils of State and Ministers; Julián González, Minister of Culture, and Miguel Barnet, reelected President of  UNEAC.

At the ceremony, two works by plastic artist, Juan Quintanilla, were presented to Raul, and to the historic leader of the Cuban Revolution, Fidel Castro, in recognition of their lifetime work in favor of the development of Cuban culture.