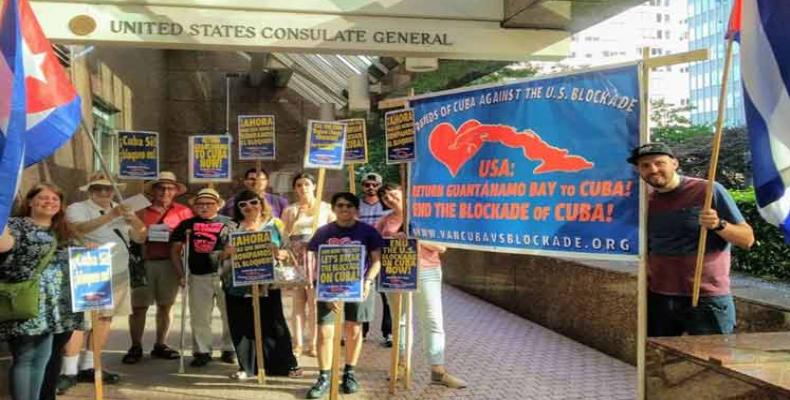 Vancouver, July 24 (RHC)-- Friends of Cuba in Canada gathered in front of the U.S. consulate in Vancouver to demand the end of the economic and financial blockade, which has caused countless damages to the people of the Caribbean country.

Activist Tamara Hansen told Prensa Latina news agency via Facebook that the mobilization took place as it has every month since the initiative was first launched on September 17, 2015.

Under the slogan 'Lifting the U.S blockade Against Cuba Now' and organized by the Friends of Cuba against the U.S. Blockade-Vancouver (FCAB-Van) group, the peaceful demonstration called on the White House to listen to the claim of the international community that urges Washington to lift its coercive measure against the Caribbean state.

In November 2017, the UN General Assembly again passed a resolution, for the twenty-sixth consecutive year, urging Washington to lift its blockade policy. The UN resolution was supported by an overwhelming majority of the international community represented at the UN, 191 votes in favor and only two against, the United States and Israel.

During the solidarity demonstration in Vancouver, participants carried banners reading: 'Cuba Yes, Blockade No!' and 'Return Guantanamo to Cuba Now!', referring to the portion of Cuban territory in that eastern Cuban province illegally occupied by a US naval base.

The U.S. blockade against Cuba, imposed in 1962 and maintained by both Democratic and Republican administrations, is the longest economic siege in human history, experts have warned.

A statement by the group almost three years ago, when the monthly sit-ins in Vancouver began, stressed that 'despite the normalization of diplomatic relations between Cuba and the United States (...), many of the criminal policies (...) have been in place for more than 50 years'.

FCAB-Van, the successor to the Free the Cuban 5 Committee-Vancouver, was founded shortly after the celebration of the return to Cuba of the Cuban Five anti-terrorists who served long, unfair sentences in U.S. jails.

FCAB-Van publicly warned that 'as long as the cruel blockade exists, the group will return each month in front of the U.S. consulate in Vancouver', as they did for the return of the Five to Cuba.