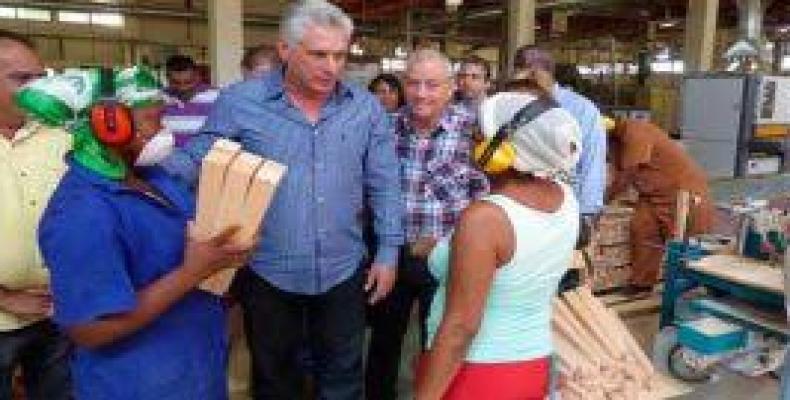 Founded in 1977 with the auspices of the Food and Agriculture Organization (FAO) and cooperation agencies from other countries, the Food Processing Industry Research Institute is devoted to the processing of soy yogurt, fine handmade chocolates, fortified foods, liquid flavors as well as powder flavors, and nutritional supplements for vulnerable population groups, among them children, the elderly and people with specific dietary needs.

The Cuban leader exchanged with authorities and workers at the Institute, highlighting the need to continue improving efficiency and expanding production toward substituting food imports.

The Cuban president also visited the José Martí Metallurgical Enterprise, known as Antillana de Acero, which has received a major investment to refurbish it.   Díaz-Canel described Antillana de Acero as one of the country’s most important industrial facilities, devoted mainly to the production of steel plates and stainless steel barbs.

During an exchange with workers and executives there, the Cuban president showed particular interest in workers' salaries, working hours and rest periods, food and transportation services.

Díaz-Canel said the ongoing refurbishing process at Antillana de Acero will have a significant, positive impact on the country's economy. He said it must translate into higher efficiency and salaries, as well as better working conditions.