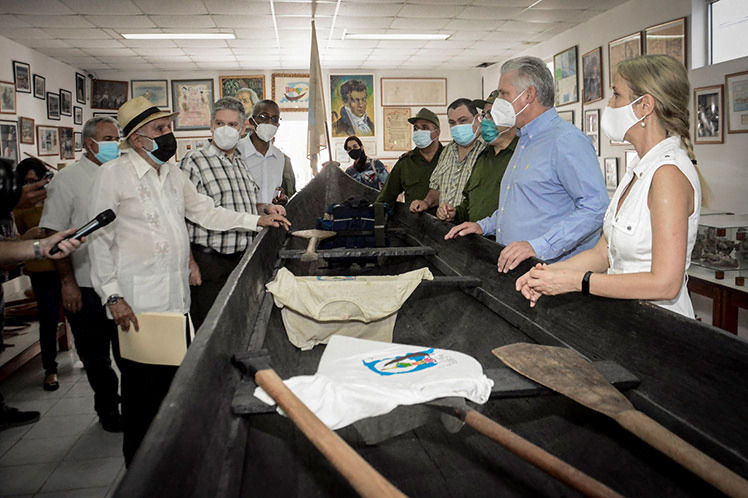 At the Antonio Núñez Jiménez Foundation of Nature and Man, the President, sees oneof the five canoes that were used the Expedition from the Amazon to the Caribbean. PL Photo

Havana, May 7 (RHC)--Cuban President Miguel Díaz-Canel visited on Friday several sites of economic and cultural interest in the capital, including the Antonio Núñez Jiménez Foundation of Nature and Man.

According to the Presidency's Twitter account, the President also learned details about the VidaBum local development project, dedicated to water-based productions to feed the population.

The initiative corresponds to the Camilo Cienfuegos cooperative in the municipality of Cotorro, east of Havana, and operates in unused spaces leased to the Guido Pérez brewery.

Meanwhile, at the Foundation, dedicated to the promotion of research and programs for the development of a culture of nature, the head of state received information about the work of the center, which keeps alive the work of the scientist, geographer, archeologist, and speleologist after whom it is named.

Its library, galleries and museum preserve valuable documents and objects, some originating from the places traveled by the Expedition from the Amazon to the Caribbean, led by Núñez Jiménez, including one of the five canoes used in the voyage.

Díaz-Canel also learned about a personal entrepreneurship project with environmental sustainability criteria which,  through the use of natural products and the recycling of waste materials, seeks to develop small-scale production of handmade cosmetic products.