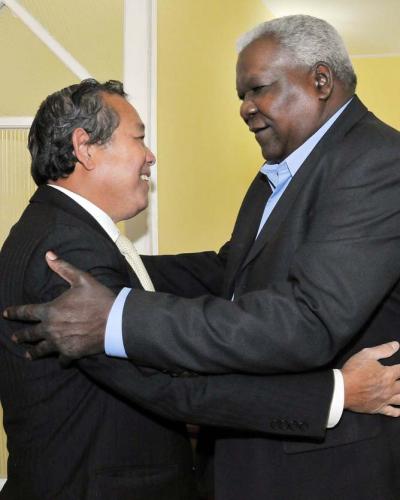 Havana, March 12 (RHC)-- Cuban Parliament President Esteban Lazo met on Tuesday with Truong Hoa Binh, President of the People’s Supreme Court of Vietnam, who is on a working visit to the island.

During the meeting, Lazo stressed the deep relations of friendship and cooperation between the peoples of Cuba and Vietnam, which date back to the struggle of that Southeast Asian country against imperial rule.

The Cuban parliament president offered the visitor and his accompanying delegation a brief update on the Cuban economy, and praised the achievements of the Vietnamese people in improving their country’s economic situation.

Meanwhile, Hoa Binh praised the good diplomatic relations between Cuba and Vietnam, which have strengthened since their establishment in 1960. He recalled the valuable support of the Cuban Communist Party to the defense and consolidation of the sovereignty Vietnam, and said that his people have special feelings towards the historic leader of the Cuban Revolution, Fidel Castro.