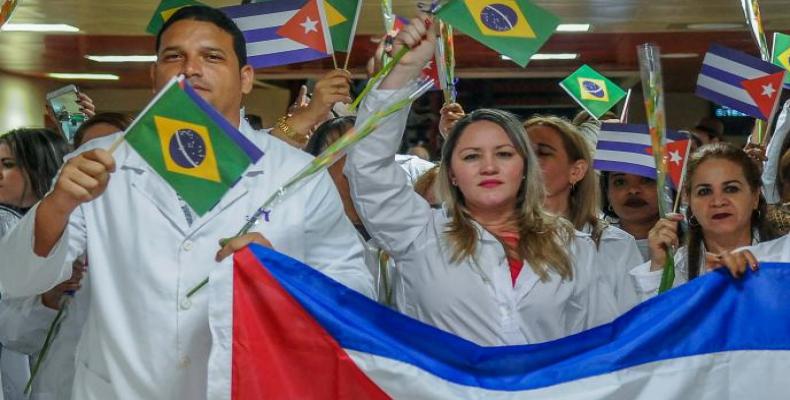 Havana, December 10 (RHC)-- Since November 22nd, almost 6,000 Cuban medical professionals serving in Brazil have returned to the island. The latest group of 406 doctors arrive in Havana on Sunday and were received by Cuban officials.

Over 8,000 healthcare workers are scheduled to return after Cuba withdrew from the More Doctors program, following threats and hostile behavior by Brazilian president-elect, Jair Bolsonaro.

Bolsonaro, who will take office on January 1st, announced his intention to violate the terms agreed on with the Pan American Health Organization, stating that he would oblige Cuban physicians to revalidate their credentials and demand changes to their contracts.

The return of the Cuban collaborators will leave hundreds of municipalities in Brazil without healthcare after the program was launched in 2013 by the Dilma Rousseff government to bring health care to the poorest and most needy.

Recently, the Ministry of Foreign Affairs (MINREX) lamented the health problems that await millions of Brazilians, but insisted that Cuba is not responsible for what happened.

“First of all, I want to reiterate that Cuba did not generate the current situation.  The decision taken by our country not to continue participating in the Mas Médicos program was a painful but necessary decision, as it is a responsibility and a priority for Cuba to guarantee the physical integrity and safety of its collaborators," said Yaira Jimenez, the MINREX Director of Communications.

Jimenez said that the Cuban government’s position responds to political manipulation of this issue, the prevailing context in Brazil, characterized by uncertainty and the dubious professionalism of the elected government.