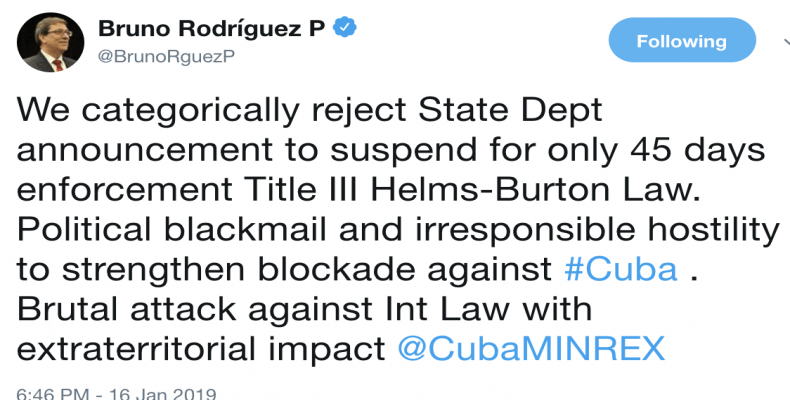 Havana, January 16 (RHC)-- Cuba categorically rejected Wednesday the announcement made by the Trump administration that it is considering the application of Title III of a law that would pave the way for U.S. citizens to sue foreign companies and individuals over properties confiscated from them during the early years of the Revolution.

The rejection came from Foreign Minister Bruno Rodriguez, who Twetted that the measure to suspend Title III of the Helms-Burton Act for only 45 days constitutes political blackmail and irresponsible hostility to strengthen the blockade against the island and a brutal attack on international law with extraterritorial impact.

In another tweet, Rodriguez recalled that since that law was enacted in 1996, all U.S. presidents, including Donald Trump, have waived its Title III due to its flagrant extraterritoriality and harm it would inflict to U.S. corporate interests, and because it would arbitrarily put third country companies under the jurisdiction of U.S. courts.

A State Department press release said that Secretary Mike Pompeo informed appropriate Congressional committees that the suspension would be for forty-five days beyond February 1, so that the administration can “conduct a careful review of the right to bring action” under that law, with the purpose of exerting pressure to achieve regime change on the island.

Observers are already warning that such move by the Trump administration could backfire.   Phil Peters, founder of the business consultancy Focus Cuba, said in an article on the issue that U.S. business partners will rightly object to the extraterritorial application of U.S. sanctions.

The analyst estimated that many will join Canada, Mexico and the United Kingdom to enact laws that prevent their companies from complying with any action resulting from Helms-Burton and that the EU will surely reactivate an action against the law presented to the World Trade Organization.

According to State Department estimates, allowing Title III to go into effect could result in 200,000 or more lawsuits being filed.