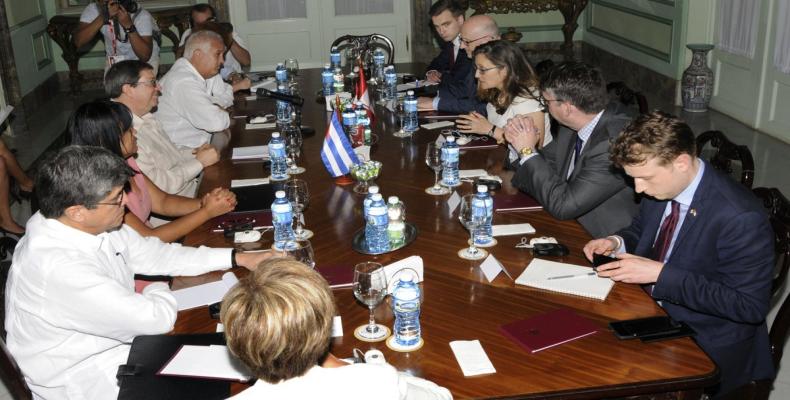 Cuba´s top diplomat expressed appreciation for the traditional support Canada accords to the Cuban-sponsored resolution voted every year at the UN General Assembly, demanding the end of the US blockade against the island, and most recently, the Canadian government´s position towards the implementation by the Trump Administration of Title III of the Helms-Burton Act.

Rodriguez Parrilla conveyed to Ms. Freeland Cuba´s disappointment with Canada´s decision to suspend the issuance of visas in Havana, without the least evidence of security risks for its diplomatic staff.

After the meeting, The Cuban minister also ratified in a twit Cuba´s willingness to contribute to initiatives that promote respectful dialogue with the government of Venezuela, on the basis of sovereign equality of states, the principles of international law, and the provisions of the Proclamation of Latin America and the Caribbean as Zone of Peace.

Cuba and Canada`s diplomatic relations were established in 1945. It is the first country of origin of tourists visiting Cuba, and various Canadian companies do business with Cuba.

One of them is Sherrit, considered one of the biggest foreign investors in the country, with interests ranging from the exploitation of nickel and cobalt, to oil exploration and exploitation.

Ottawa has reiterated that it will not serve or ratify any ruling of a US court deriving from the implementation of Title III of the Helms Burton Act, which came into effect last May 2.