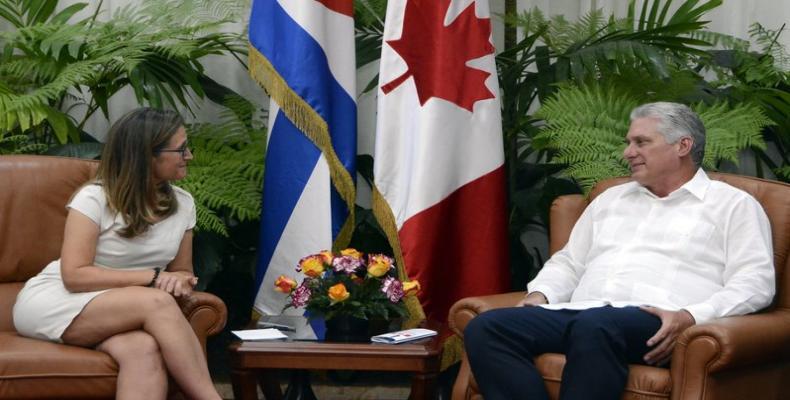 During the meeting, both parties exchanged views on the state of bilateral relations and their willingness to continue expanding them in all areas. They also discussed issues of mutual interest on the international and regional agendas.

President Díaz-Canel thanked Canada for its traditional support for the resolution against the blockade, which is approved each year by the United Nations General Assembly, and for the position taken by the government of that country regarding the implementation of the Helms-Burton Act.

The Cuban president also reiterated Havana´s solidarity with Venezuela and the concern for the damage caused to that Latin American nation and its population by the economic sanctions, the policy of siege and the isolation to which it has been subjected by the United States. He also said that the Monroe Doctrine is a danger to the entire hemisphere.

Earlier on the day, Cuban Foreign Minister Bruno Rodriguez held talks with his Canadian counterpart. On Twitter he said he conveyed to Freeland an acknowledgment on the restoration of some migration services at the Canadian embassy in Havana, and that he called for the prompt normalization of the embassy´s operations.

Rodriguez also said that the tightening of US coercive measures against Venezuela damage its people and are contrary to International Law and the dialogue process.