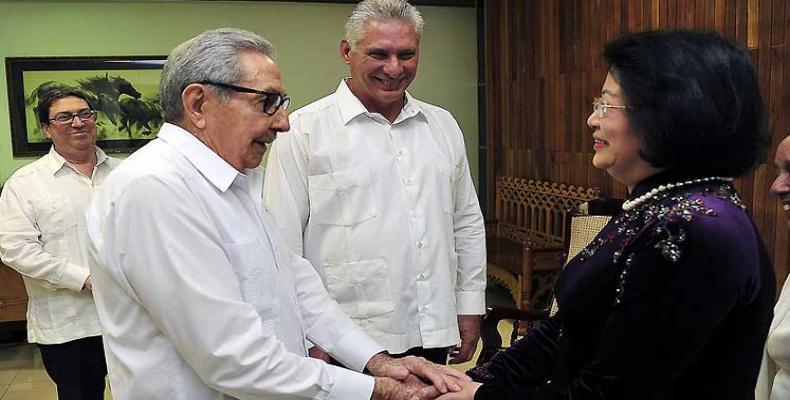 Havana, July 9 (RHC) The leader of the Communist Party of Cuba, Raúl Castro, and the president of the island, Miguel Díaz-Canel, received Tuesday in Havana the vice president of Vietnam, Dang Thi Ngoc Thinh.

During the meeting, the Cuban leaders and the guest discussed the close ties that unite the peoples, parties and governments of the two countries as well as the respective experiences in the construction of socialism.

According to a note released on the presidency website, the Cuban and Vietnamese dignitaries   also discussed the excellent state of bilateral relations, the implementation of the agreements between Vietnam and Cuba, and issues on the international agenda.

Dang Thi Ngoc Thinh began an official visit to Cuba on Monday that is expected to conclude on Thursday.

As part of her agenda, the Vietnamese vice-president also met with her Cuban counterpart, Salvador Valdes, in a meeting in which both reiterated the mutual commitment to strengthen economic and commercial ties.

She also visited the Special Development Zone In Mariel (ZEDM) west of Havana where she checked the progress of the building of the Vimariel, S.A. industrial park.