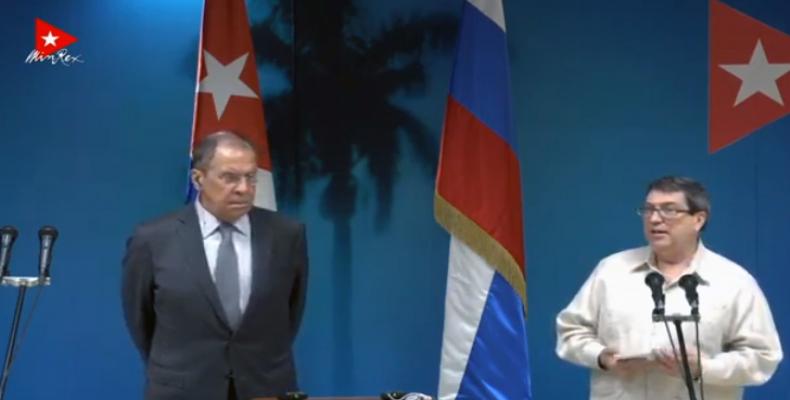 Havana, July 24 (RHC)-- The Foreign Minister of Russia, Sergey Lavrov, and his Cuban counterpart, Bruno Rodriguez, highlighted on Wednesday the excellent status of bilateral relations.  The two diplomats held a press conference after merting at the headquarters of the island’s Foreign Ministry in the Cuban capital.

Their talks reportedly covered the evaluation agreements reached during the visit of President Miguel Diaz-Canel to Russia in October last year, an upcoming visit to the island by Prime Minister Dmitry Medvedev in October, and the two countries coincidences on pressing issues on the international agenda -- primarily the preservation of international peace and security.

The Cuban foreign minister said that the strengthening of political, diplomatic, economic, trade, financial and cooperation relations were discussed during the encounter.  Bruno Rodriguez noted that relations are making progress on strategic sectors for Cuba like those of energy, industry and transportation with the support of both governments.

Cuba's top diplomat added that Russia's cooperation with the Caribbean island, taking place amid threats to international peace and security, the proliferation of non-conventional wars and the imposition of unilateral measures, is highly appreciated by Cuban authorities.

The Russian foreign minister, for his part, conveyed greetings to the Cuban people on the occasion of the 66th anniversary of the attack on the Moncada Barracks, Cuban's Day of National Rebellion, and reiterated Moscow´s commitment to voice its opposition to U.S. hostility against the island.

Asked about remarks by U.S. Secretary of State Mike Pompeo regarding Russia's 'presence' in Latin America as a threat to the region´s independence and security, Lavrov described the comments as “ridiculous” and urged people to take a look at a world map to verify the locations of U.S. military bases, to see how distant they are from the continental United States.

The top Russian diplomat regretted the U.S. lack of respect of International Law, and reiterated that his country will continue defending the right of the Cuban people to choose its own future, and the means it deems necessary to develop its society.

He also rejected Washington’s attempts to impose on other countries its own values and principles, which do not necessarily reflect the values of other peoples or civilizations.

As part of Lavrov´s activities in Cuba, he participated in the official unveiling of the newly restored Statue of the Republic, in the new headquarters of the Cuban Parliament, located in the National Capitol Building.  The restoration was undertaken with the assistance of Russian experts who are participating in joint projects related to the 500th anniversary of the foundation Havana.