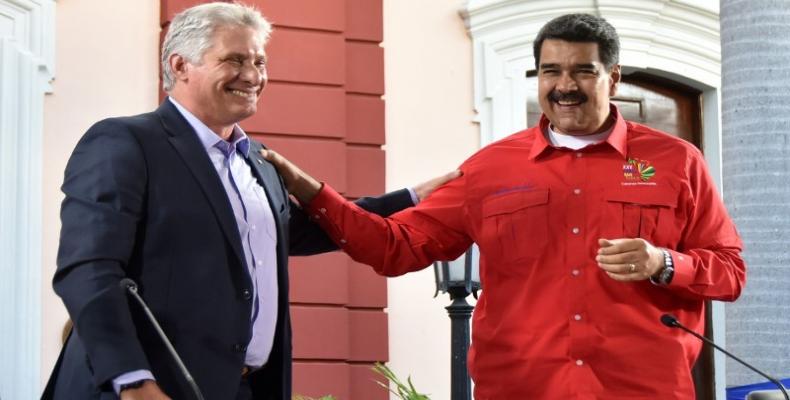 Caracas, July 28 (RHC)-- Cuban President Miguel Diaz Canel said Sunday that Venezuela is the front-line in the anti-imperialist struggle of the world, and urged the Sao Paulo Forum to adopt a more active role, in the complex international scenario, characterized by a renewed imperial hostility and the retreat of progressive forces in some countries of the region.

The Cuban leader participated with Venezuelan president Nicolas Maduro Moro in the closing session of the 25th Edition of the Sao Paulo Forum, a mechanism of coordination of progressive forces founded in 1990 by former Brazilian president Luis Inacio Lula da Silva and the historical leader of the Cuban Revolution, Fidel Castro.

In his remarks, Diaz-Canel pointed to the neoliberal upsurge in the region, aided by a set of anti-democratic tools that include, among others, coup d’états, criminalization of progressive leaders, and fraud and data manipulation to undermine whatever has been accomplished in favor of real democracy and social justice.

“US imperialism's counter offensive and the oligarchy, alongside the hawks that have literally hijacked Washington's foreign policy towards Latin America and the Caribbean, are dangerously threatening the geographical space that CELAC declared a Peace Zone,” said Diaz Canel.

The Cuban leader also made reference to the reinforcement of the US blockade against Cuba, which includes blackmail and seeks that the Revolution relinquishes its principles by betraying its friends, something that he stressed will never happen.

In his closing remarks to the event, Venezuela’s President Nicolas Maduro urged all participants in the Forum to work hard for the unity of the world left which should overcome the stigma of division.

Maduro recalled that Venezuela suffers aggressions of all kinds, which includes a brutal media campaign.   In that regard, he conveyed his appreciation to all of those who were present in the Forum, despite all the threats, and traveled to Caracas to share with the Venezuelan people.