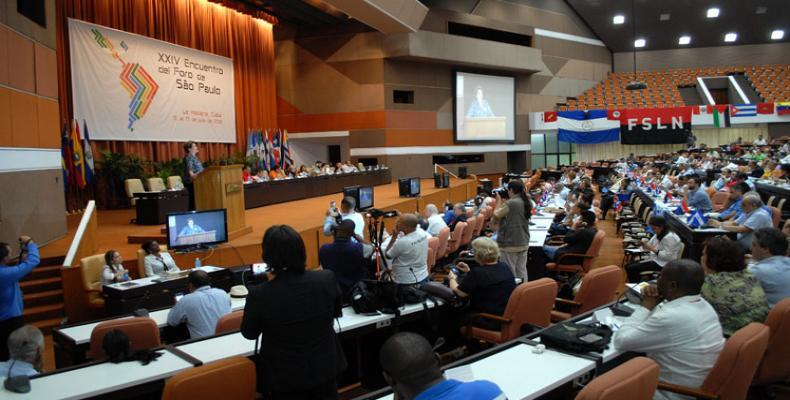 Havana, July 16 (RHC)-- With the opening of the 24th annual meeting of the Sao Paulo Forum on Sunday, Cuba became the capital of solidarity and commitment among progressive regional forces in the quest for a better future for Latin America and the Caribbean.

During the gathering, which ends on Tuesday, more than 430 delegates are debating the need for regional integration and unity.   In addition to discussions on Monday, meetings of youth, women and parliamentarians are assessing the experiences of the left-wing Latin American parties and social movements represented in the encounter, reports Prensa Latina.

During the first session on Sunday, delegates advocated for solidarity with leaders and governments in the region attacked by the right, including those of Venezuela, Nicaragua, Cuba and Bolivia – with special attention on the case of Luiz Inácio Lula da Silva in Brazil.

Speaking at the event, the Prime Minister of St. Vincent and the Grenadines, Ralph Gonsalves, urged the international community to support these countries.

“One day it is Venezuela, and another, it is Brazil and then it is Nicaragua.  And let us always remember the coup d'état against the government of Manuel Zelaya in Honduras in June 2009,” Gonsalves said.

Dilma Rousseff, herself a victim of a coup from the right, told delegates her “crime” and Lula's crime was to defend the humble of Brazil and their sovereignty over natural resources.

“We never accepted the abuses or the submission to the transnationals. that's why they persecuted us and the coup came,” she said.

Speaking at the event, the head of International Relations Department of the Cuban Communist Party Central Committee, Jose Ramon Balaguer, called on the progressive sectors of the region to work together in the face of the assault of neo-liberalism.

He added that unity was and is an essential condition to achieve that goal and he invited all parties and groups present at the forum to work in that direction.