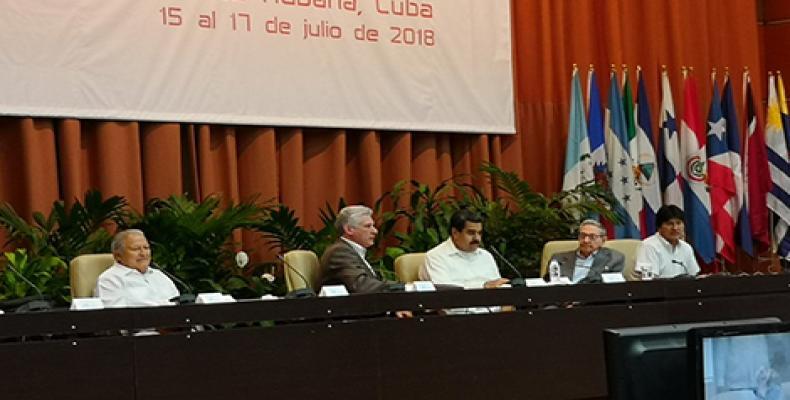 Havana, July 18 (RHC)-- The 24th annual meeting of the Sao Paulo Forum concluded on Tuesday in the Cuban capital, issuing a Final Declaration with a call to reinforce the world movement to defend peace.

The closing ceremony was presided over by the First Secretary of the Cuban Communist Party, Raul Castro Ruz.  Next to him on the rostrum were the presidents of Cuba, Miguel Díaz-Canel; Nicolás Maduro from Venezuela,  Bolivia´s Evo Morales and Salvadoran president, Salvador Sánchez Cerén.

Monica Valente, Executive Secretary of the Forum, read the Final Declaration that summarized the main proposals and contributions of three days of debates on how to deter the new neoliberal right wing push against the progressive processes in Latin America and the Caribbean.

The actions included on the document ranged from the launching of a “Free Lula” international campaign, to the repudiation of militarism and the defense of regional integration.

Speaking at a plenary session devoted to Fidel Castro´s thoughts, Venezuelan president Nicolas Maduro said that the region is, like never before, in better condition to advance in the struggle against imperialism.

At the Havana Convention Center, he stressed that it is not a time to regret setbacks or boast about achievements, but it is the time to fight for unity, and continue in battle until victory.

Evo Morales, for his part, stressed that there will be imperialist aggressions, and provocations, but the most important thing for progressive forces is to remain united.

Cuban President Miguel Diaz Canel also addressed participants.  He noted that a critical assessment of the regional reality shows that despite all imperialist efforts, the flame of rebellion is alive in the homeland of Bolivar and Marti.

Diaz Canel added that the tributes paid to Fidel Castro, Ernesto Che Guevara and Hugo Chavez during the Forum´s sessions have ratified the presence of their legacies.

In concluding, the Cuban president assured that the island will not turn to capitalism, and that there will be no concessions for those who seek to distance the Cuban society from the Revolution´s historical internationalist positions.