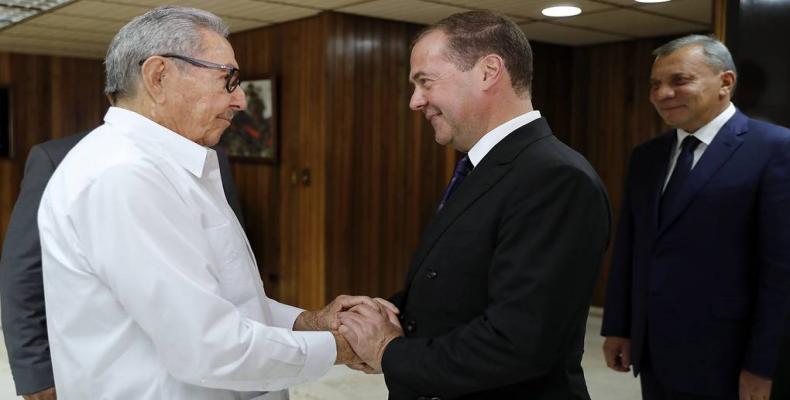 Havana, October 3 (RHC)--The first secretary of the Central Committee of the Communist Party of Cuba, Raúl Castro, welcomed Thursday Russian Prime Minister, Dimitri Medvedev, also president of the United Russia party, who is on an official visit to the Caribbean island.

According to a note published on the website of the Presidency, in the fraternal meeting both leaders discussed the excellent friendly relations between the two peoples, parties and governments.

They also expressed their will to continue strengthening partisan and bilateral ties.

The Russian guest was  accompanied by Yuri I. Borisov, Vice President of the Government of the Russian Federation, and Andrey A. Guskov, Russian Ambassador to Cuba.

José Ramón Machado Ventura, second secretary of the Central Committee of the Communist Party, and Bruno Rodríguez, Minister of Foreign Affairs, both members of the Political Bureau, were present.

Earlier in the day, the Russian Prime Minister Dmitry Medvedev said Cuba is "a really important ally of Russia" .

"This meeting once again showed that Cuba is a really important ally of Russia in Latin America, that our relations are aimed at future development and are not affected by changing conditions because we are building them on the basis of mutual respect and friendship which connect our peoples," Medvedev said.

"Not everyone likes the dialogue between Russia and Cuba. In the last months, the United States has expanded Cuba's energy blockade. We also see an intention to create a toxic atmosphere around Russian-Cuban cooperation, to scare away investors, and in fact impose an energy blockade on the island. However, Cuba's experience of countering the embargo for almost 60 years shows that such attempts will not have any results, just like attempts to exert pressure on our country will not have any success as well," he added.