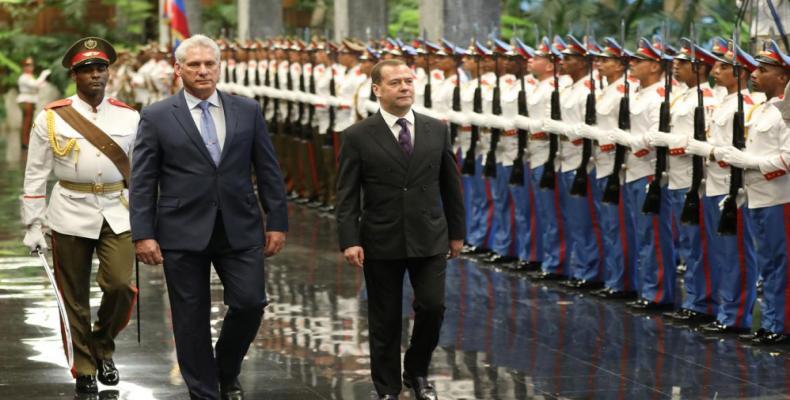 Medvedev received the State honors at the Palace of the Revolution in the Cuban capital.

Medvedev laid a wreath of flowers at the memorial to Cuban National  hero Jose Marti on Havana’s Revolution Square before meeting with Cuban President Miguel Diaz-Canel and starting official talks. He was due to make a statement to the media later on Thursday.

The Russian Prime Minister arrived in Cuba in the morning and was received at the José Martí International Airport by Foreign Minister Bruno Rodríguez Parrilla.

As part of the agenda for this day, it is expected that intergovernmental and interdepartmental agreements will be signed in his presence, as well as bilateral commercial contracts.

Medvedev will also visit the National Capitol and will receive an Honorary Doctorate in Political Science from the University of Havana.

Russia and Cuba maintain relations in the social and economic spheres and promote projects in strategic sectors for both nations, such as industry and transport.

In recent days, the approval of the first joint venture between the two nations for the production of composite materials for construction was announced.

Teccomp Caribe, S.A. - for the manufacture of glass fiber composite bars - is the result of an alliance between the Cuban Mercantile Society Siment Aut S.A. and the Russian company United Composite Technologies.