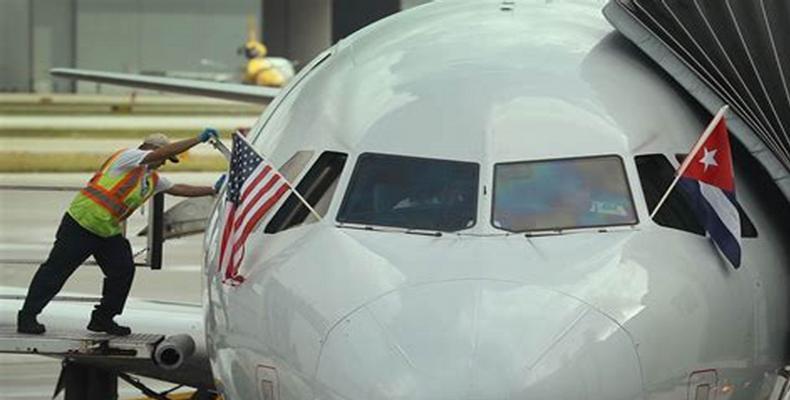 Washington, October 25 (RHC)-- The United States will suspend scheduled flights to nine destinations in Cuba beginning in December, according to White House sources.  On December 10th, U.S. airlines will have the authorization to fly only to Havana.

American Airlines said in a statement it was “reviewing today’s announcement regarding service to non-Havana airports in Cuba.  We will continue to comply with federal law, work with the administration, and update our policies and procedures regarding travel to Cuba as necessary.”
JetBlue said the company will also comply with the new regulations. “We are beginning to work with our various government and commercial partners to understand the full impact of this change on our customers and operations in Camagüey, Holguín and Santa Clara,” the company said on a statement sent to the Miami Herald.

Charter flights, on which many Cuban-Americans travel to Cuba from Miami, will not be affected. Scheduled commercial flights to Cuba began under the administration of Barack Obama in 2016.  They improved the conditions of the service and the prices of the flights, which until then had been the monopoly of less-efficient charter companies.

Earlier this week, new restrictions on the Cuban government imposed by the Department of Commerce entered into force.  The agency revoked the authorizations for U.S. companies to lease planes to Cuban government airlines.  As a result, Cubana de Aviacion, the leading Cuban airline, was forced to cancel flights to seven international destinations because several leasing companies canceled their contracts.

Responding to these latest moves to shut down many commercial flights between the U.S. and the Caribbean island, Cuban Foreign Minister Bruno Rodriguez, currently in Baku attending the 18th Summit of the Non-Aligned Movement, reacted on Twitter and firmly rejected the measure.  The top Cuban diplomat aid that "these measures tighten the travel ban on U.S. citizens and damage people-to-people ties."

For his part, Carlos Fernández de Cossío, U.S. general director of the Cuban Foreign Ministry, wrote that imperialism is attacking regular flights to several Cuban cities "in an eagerness to punish Cuba's unbreakable rebelliousness."   He added that the U.S. government does not mind affecting family contacts or creating unjust inconveniences.  And he emphasized: "Our response is invariable."