Event for solidarity and against neoliberalism continues in Cuba 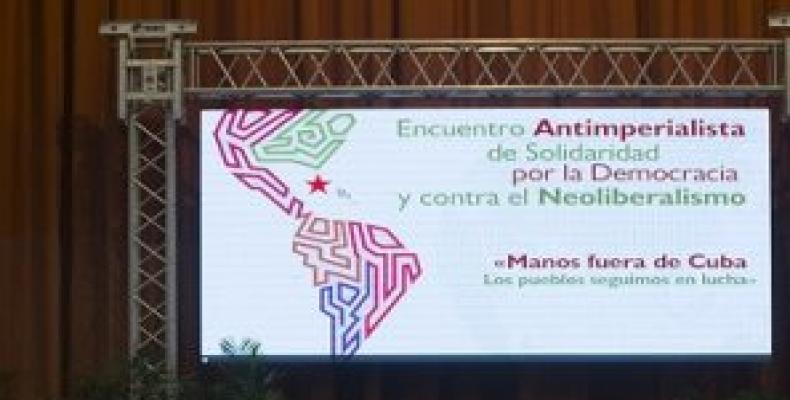 Havana, November 2 (RHC)-- The Anti-imperialist Encounter of Solidarity, for Democracy and against Neoliberalism, continues Saturday working in commissions, searching for an action plan for the struggles of the peoples in defense of their rights.

More than one thousand delegates from 95 countries will meet in six groups based on themes such as solidarity with Cuba and other just causes; peoples in the face of free trade and transnational corporations; and decolonization, cultural warfare, strategic communication, and social struggle.

They will also analyze youth strategies for continuity in struggles; democracy, sovereignty and anti-imperialism; and integration, common identities, and struggles.

On Friday, at the inauguration of the event, Cuban Foreign Minister Bruno Rodriguez warned about the possible increase of hostility by the United States against the island and additional blockade measures, due to the presidential electoral campaign in the northern country.

In that sense, he called for all efforts to be made in solidarity with the Caribbean nation.

He referred to the growing aggressiveness of Washington against Cuba. He cited as an example the use of unconventional mechanisms on an international scale such as threat or coercion to prevent the entry of fuel into Cuba.

On the other hand, Rodriguez confirmed that his country is not involved, nor is it responsible, in the social explosion that is shaking Latin America.

"Perhaps the only relationship we have with these events is that the Cuban Revolution is an example to be followed by the peoples who fight against neoliberalism," he said.

Rodriguez also advocated for better and higher use of social networks by social and popular movements, the left and progressive forces, in defense of their peoples. In that regard, he considered necessary the communication, the political and digital organization of the excluded and exploited masses.

"We cannot give ourselves the luxury of giving space to the adversary who uses all weapons,'" said the head of the island's diplomacy.

He recalled that the malicious use of social networks contributed to the electoral defeat of left, progressive, and popular projects.