Anti-Imperialist Encounter of Solidarity, for Democracy, and against Neoliberalism meets in its last session 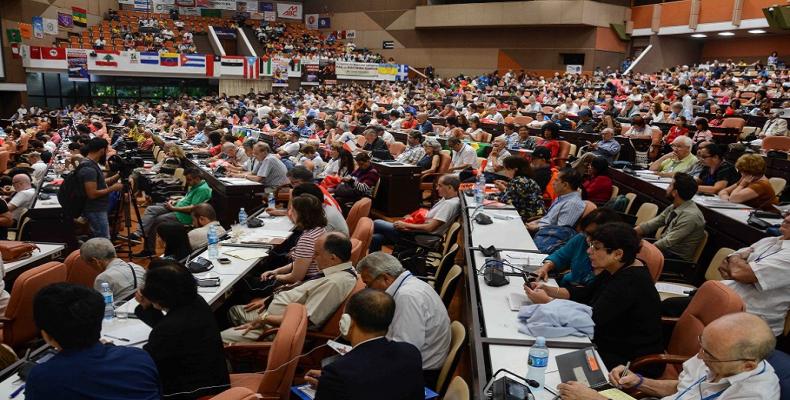 Havana, November 3 (RHC)-- After an intense weekend of debates, the Anti-Imperialist Encounter of Solidarity, for Democracy and against Neoliberalism is coming to an end in the Cuban capital this Sunday with the approval of a plan for the defense of the peoples against the interference of the United States and the international right.

On Saturday the leader of the Workers Party (PT) of Brazil, Gleisi Hoffmann, received more than two million signatures collected in Cuba, in just 14 days, to demand the release of former president Luis Inácio Lula da Silva and a picture that accredits the signatures and calls for the end of his unjust imprisonment.

The picture was handed over by the president of the Cuban Institute of Friendship with the Peoples (ICAP), Fernando González.

Likewise, the secretary-general of the Central Workers' Union of Cuba, Ulises Guilarte, indicated that the signatures convey the backing of the militant solidarity of all those gathered in the anti-imperialist meeting.

Subsequently, Hoffmann thanked Cuba for its support and said that the Caribbean nation has always stood out for its solidarity and generosity.

She regretted the attacks and threats by the president of Brazil, Jair Bolsonaro, against Cuban doctors that led to the departure of the specialists from the South American nation and currently, millions of Brazilians lack medical services.

Hoffman also assured that the struggle for Lula's freedom is for the independence of the Brazilian people.

The more than 1,000 delegates from 95 countries attending the anti-imperialist event met in six commissions based on topics such as solidarity with Cuba and other just causes; peoples in the face of free trade and transnational corporations; and decolonization, cultural warfare, strategic communication, and social struggle.

They also analyzed the strategies of the youth for continuity in the struggles; democracy, sovereignty and anti-imperialism, and integration, identities, and shared efforts.