Bruno Rodriguez: No threat or blackmail will ever extract the least political concession from Cuba 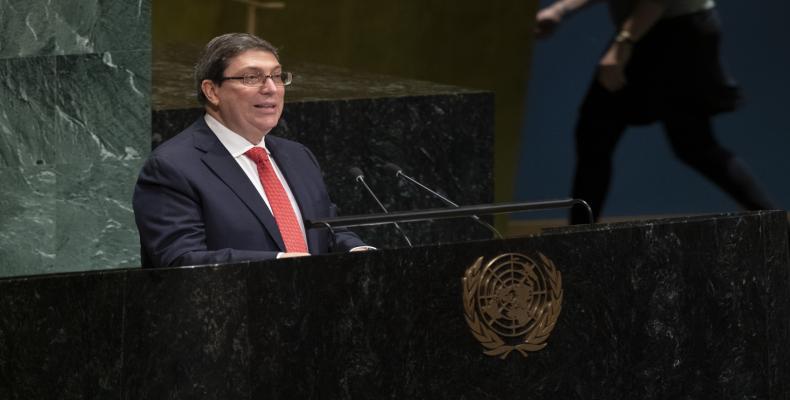 United Nations, November 7 (RHC)-- Cuba's Foreign Minister, Bruno Rodriguez, denounced Thursday at the UN General Assembly the intensification of the hostile policy of the United States against the island.

Rodriguez presented before the UN Body the text of a draft resolution requesting the end of the decades-long blockade against the Caribbean island nation, which was ultimately passed by an overwhelming margin of 187 in favor, three oppositions, and two abstentions.

In recent months, he recalled, Washington began an escalation in its aggression against Cuba, with the application of non-conventional measures to prevent the provision of fuel to the island from different markets through sanctions and threats to ships, shipping, and insurance companies.

Rodriguez stressed that the U.S. has full responsibility of many of the difficulties on the island, and described other numerous actions taken by Washington against Cuba in recent months such as the implementation of Title III of the Helms-Burton Act, the persecution of the island’s banks' financial relations, the reduction of remittances to Cuban citizens, and  the disruption of visa issuance with the limitation of consular services in Havana, among others.

The island’s top diplomat recalled that Washington has set out to sabotage the international cooperation that Cuba provides in the sphere of health “with a slander campaign in which  U.S. politicians and officials attack a program based on genuine South-South cooperation.”

Speaking before the Assembly, US ambassador to the UN, Kelly Craft,  argued that like all nations, her country gets to choose which countries it trades with.

“This is our sovereign right. So, it is worrying that the international community, in the name of protecting sovereignty, continues to challenge this right,” she said.

She also stated that the Cuban government violates the human rights of its people.

In response to Ambassador Craft’s arguments, the Cuban foreign minister said that the United States Government has no moral authority to lecture anybody on human rights.

Rodriguez described blatant violations of articles of the Universal Declaration of Human Rights committed by the United States, among them, he cited the impunity of the gun lobby, the existence of 2,3  million people in prisons -- one-quarter of all the world’s prison population--, and the shooting epidemic that costs the lives of thousands of citizens annually.

“The U.S.  is party to only 30% of Human Rights instruments. It doesn’t recognize the right to life, peace, development, security, food, or the right of children,” Rodriguez said.

The minister went on to stress that the U.S. is implementing a system of coercive measures against dozens of countries in a trend that has become stronger under the current administration.

After expressing Cuba’s  unchanging solidarity to the heroic people of Venezuela, its civic and military union and the Bolivarian and Chavista government,  the Cuban top diplomat  added that the US government has resorted to false and slanderous arguments as pretexts to intensify its aggression on Cuba, and he reiterated that neither threat or blackmail will ever extract the least political concession from the island.

“We will not back down from our determination to achieve civilized relations with the U.S. government based on mutual respect, ” he said, and then he quoted a phrase by Raul Castro from a recent speech.

“Despite its immense power, imperialism cannot crush the dignity of a united people, who are proud of their history, and of the freedom they have attained after so much sacrifice.”

The Cuban Foreign Minister also expressed Cuba’s most profound gratitude to all those  who have rejected the blockade and those who have supported the island on its ceaseless struggle to end that U.S. hostile policy.