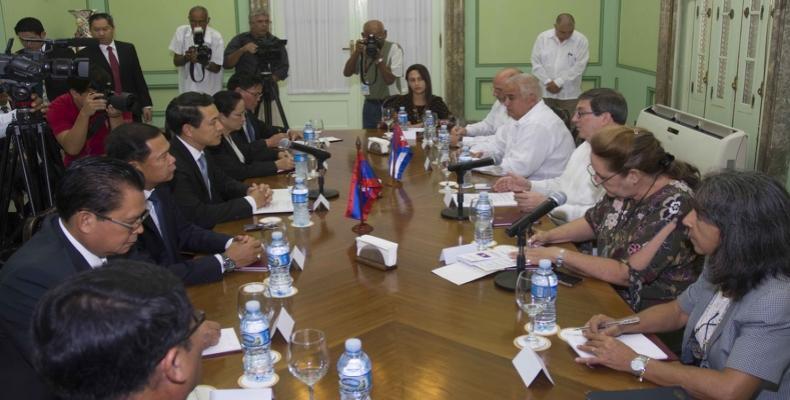 Havana, November 11 (RHC)-- Saleumxay Kommasith, Minister of Foreign Affairs of the Lao People's Democratic Republic, stressed Monday in Havana that his country and Cuba share historical ties of friendship with the defense of socialism as a  common goal.

The diplomat spoke at a ceremony to mark the 45th anniversary of bilateral relations held at the headquarters of the Ministry of Foreign Affairs, which was attended by Salvador Valdes Mesa, Vice President of the Republic.

“This anniversary is a significant milestone in friendship, cooperation and fraternal solidarity that unites us in favor of the safeguard and development of the two nations in the midst of a complicated international situation,” the Lao Foreign Minister said.

As part of his visit two agreements were signed for economic and commercial cooperation, and health, in a ceremony held at the headquarters of the Ministry of Foreign Trade and Foreign Investment.

Meanwhile, Ana Teresita González Fraga, Vice Minister of Foreign Affairs, recalled that on November 4, 1974, diplomatic relations were established between the two nations, but since 1960 there were bridges of brotherhood in the common struggle to eliminate the aftermath of colonialism and neocolonialism.

Gonzalez also pointed out that Cuba and Laos united their voices in defense of the right to self-determination of peoples, sovereignty, social justice, and to firmly oppose foreign interference.