Bruno Rodriguez: A pleasure to meet again with the Archbishop of New York 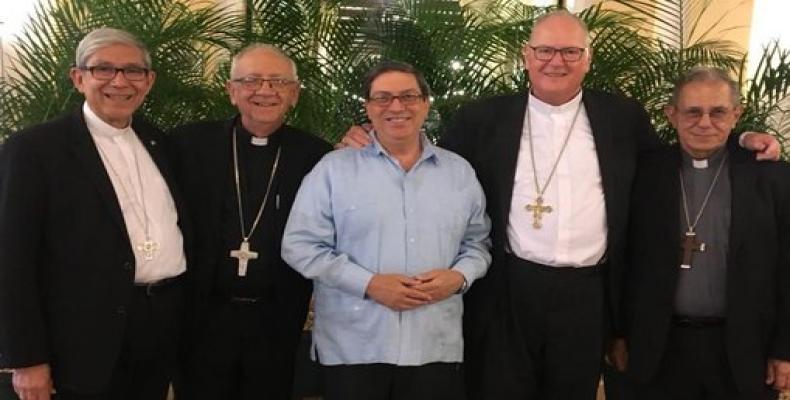 Havana, February 11 (RHC)--Cuban Foreign Minister Bruno Rodriguez described as pleasant his meeting in Havana this Tuesday with the
Archbishop of New York, Cardinal Timothy Dolan, who is visiting the island.

Cardinal Juan de la Caridad García Rodríguez, Archbishop of Havana, and Bishop Emilio Aranguren, president of the Cuban Conference of
Catholic Bishops, also took part in the encounter, which the Foreign Minister illustrated with a picture on Twitter.

The visitor met in September 2018 in St. Patrick's Cathedral, New York, with President Miguel Díaz-Canel, who then invited him to the island.

As part of his Cuba visit, Dolan toured the almost 300-year-old University of Havana, where he paid tribute to Father Félix Varela, the precursor of the Cuban nationality.

At the center of high studies, its first vice-rector, Dionisio Zaldívar told Cardinal Dolan about the history of the institution, its links with the past and the society of the island, as well as its study plans.

For his part, the Bishop of Brooklyn, Monsignor Octavio Cisneros, evoked Varela's dedication to the sick, the needy and immigrants during his stay in New York.

For several years now, the Cuban Catholic Church is advocating for the canonization of Father Felix Varela .
so.