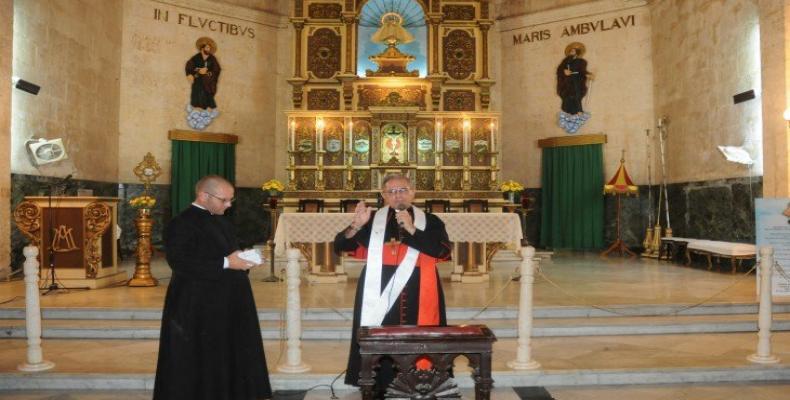 Havana, Oct 10 (RHC) The third Cardinal in the history of the Catholic Church in Cuba, Juan de la Caridad García Rodríguez, officiated on the night of October 9, his first liturgical act on Cuban soil after being ordained by Pope Francis earlier this month.

The religious arrived from Rome on Wednesday night and headed to the Minor Basilica and Diocesan Shrine of Our Lady of Charity, in the Havana municipality of Centro Habana, to entrust his new mission to the Patron Saint of Cuba.

At the end of the liturgy, the Cardinal told the press that the Pope, through his person, sent the blessing to the people of Cuba.

"We thank Pope Francis and the Holy Spirit for the election of 13 cardinals who are also (...) announcing the Gospel, and we hope that there will be progress in peace, love, and harmony for all humanity and especially for our Cuban people," he said.

The Cardinal's official reception will take place this Saturday, October 12, in a solemn Mass in the Havana Cathedral.

Born in Camagüey in 1948, the prelate began his philosophical and theological studies at the San Basilio Magno Seminary in the town of El Cobre, on the outskirts of Santiago de Cuba, and concluded his preparation at the San Carlos and San Ambrosio Seminary in Havana.

Last July 13 he was named a member of the Congregation for the Clergy, he represented Cuba in the Assembly of Bishops of the continent (Assembly of Aparecida, Brazil 2007) and for three years, between 2006 and 2009, he presided over the Cuban Episcopal Conference.