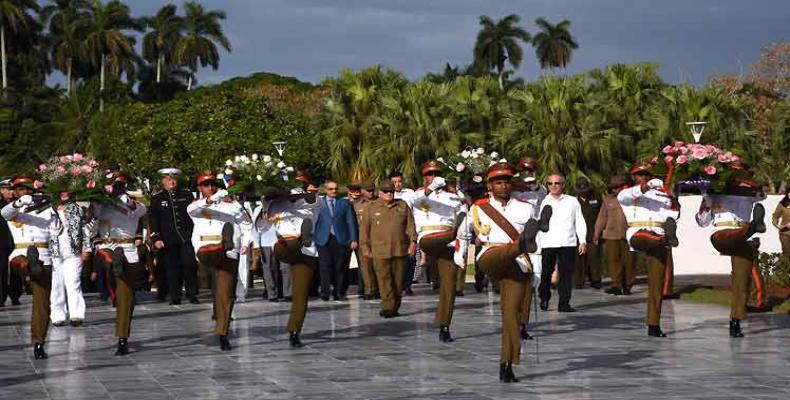 Havana, February 24 (RHC)--The 102nd anniversary of the founding of the Red Army, 'Defenders of the Fatherland Day', was celebrated Sunday at the Mausoleum of the Soviet Internationalist Soldier, in the outskirts of Havana.

The political and military ceremony was presided over by Army Corps General Alvaro Lopez Miera, the first deputy minister and chief of staff of the Revolutionary Armed Forces (FAR).

There were also high representatives of the embassies of Russia, Belarus, Kazakhstan and Azerbaijan, members of the military-diplomatic corps accredited in the island and officials of Cuban institutions.

Rear Admiral Carlos Duque, head of Directorate in the Ministry of the Revolutionary Armed Forces, recalled that there was not a single victory in the first years of the October Socialist Revolution that was not linked to the nascent Red Army.

He assured that the historical legacy and the combative experiences of the Soviet army also reached the island, multiplying the rebellion of the Cubans in the defense of the homeland and the independence of the nation.

He pointed out that its solidarity aid constituted an important contribution to the development of national defence and the FAR.

He stressed that today the collaboration between the Cuban and Russian Armed Forces is strengthened and new paths are opened in the consolidation of bilateral cooperation.

For his part, Colonel Dmitry Gavrilchik, military attaché of Belarus, stated that this 23 February also marks the inauguration in Cuba of the Mausoleum to the Soviet Internationalist Soldier, 42 years ago.

He explained that this is a day of remembrance of all the heroes of the Red Army and of all the Soviets who gave their lives for the freedom and independence of the country.