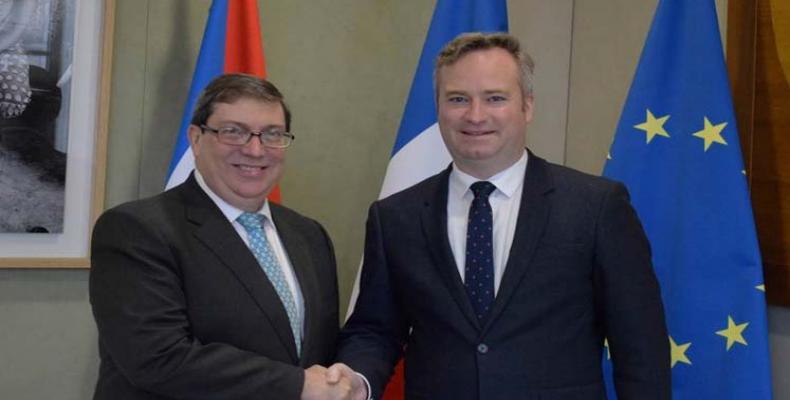 Paris, February 27 (RHC)-- Cuban Foreign Minister Bruno Rodriguez and the Secretary of State of the French Ministry for Europe and Foreign Affairs, Jean-Baptiste Lemoyne, met in Paris on Thursday, where they agreed on the need to boost bilateral relations.

During the encounter, the parties discussed the progress of the links between the two countries and the interest in deepening the high-level political-diplomatic dialogue and in making progress in the economic-commercial relationships and investment.

The visitor underlined that Cuba offers a high priority to relations with France, a prominent commercial partner, and one of the primary senders of tourists to the Caribbean nation.

"We share objectives such as the defense of multilateralism, the protection of the environment and the confrontation with the impact of climate change," said the island's foreign minister, who is briefly in the capital after participating in Geneva in the high-level segment of the 43rd Session of the Human Rights Council.

Lemoyne co-chairs the Franco-Cuban Economic and Trade Commission, a forum that met in Paris last December with the signing of three new cooperation agreements among its outcomes.

In mid-January, the Secretary of State received the Deputy Prime Minister of the island, Ricardo Cabrisas.

At Thursday's meeting, Rodríguez was accompanied by the Cuban ambassador to France, Elio Rodríguez, and the Minister's Chief of Staff, Noel González. At the same time, the host was joined by the deputy director for Central America and the Caribbean at the Foreign Ministry, Sebastien Jaunet, and the director of the Secretary of State's Cabinet, François Decoster.