Cuban president recalls Fidel's idea about the strength of the people 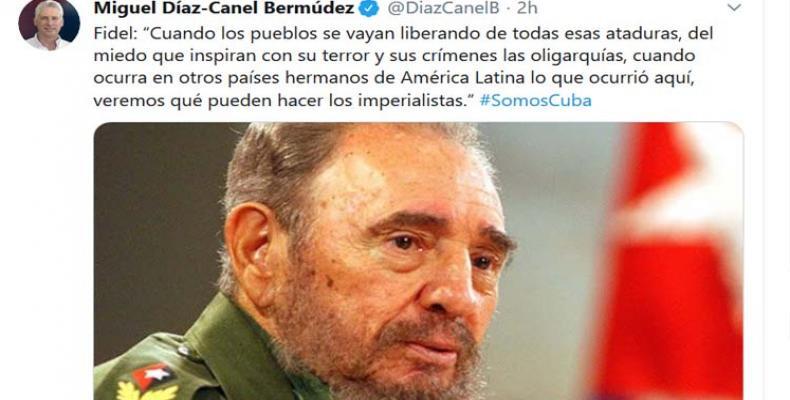 Havana, May 28 (RHC)-- Cuban President Miguel Díaz-Canel recalled the thoughts of the leader of the Cuban Revolution, Fidel Castro, when he highlighted the strength of the people against imperialism.

On his Twitter account, the president recalled a phrase that warns that when people rise up against imperial oppression, it will not be possible for those powers to continue to dominate the world.

"When the people free themselves from all these ties, from the fear that the oligarchies inspire with their terror and their crimes, when what happened here happens in other Latin American countries, we will see what the imperialists can do," he said.

Fidel Castro expressed this idea 55 years ago, during the ceremony for the eighth anniversary of the battle of El Uvero, considered the victory that marked the coming of age of the Rebel Army in its fight against the dictatorship of Fulgencio Batista.

Then he recalled that this historical date represents the moment when the Cuban people lost their fear of the military and saw that it was possible to triumph in order to change the country and take control of its destiny.

He said that the same thing could happen in other countries of the Latin American continent, when the popular forces became aware of their power.

If the governments of Latin America accept the right of the imperialists to intervene in any country, they will be shamelessly renouncing the independence and sovereignty of their peoples, Fidel Castro said.