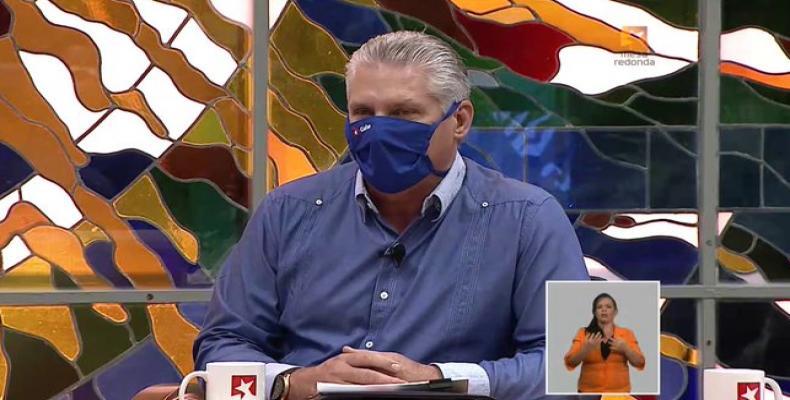 President Diaz-Canel said that the measures are well thought out and are based on the Cuban and international experience.  At the beginning of his intervention on the radio and TV program -- broadcast live on the international shortwave frequencies of Radio Havana Cuba -- the Cuban president acknowledged the role of the Mesa Redonda during the three months of the pandemic.

During this stage, he said, the country worked intensely with the fundamental objective of saving lives, and that constancy and intensity of work had as a fundamental protagonist the participation of the Cuban people and a group of organizations, which has allowed to achieve results in a group of indicators and "to be able to see that we can enter a new stage."

According to the Cuban leader, the current statistics show several signs in that direction: in the first place, if we discard the various transmission events that have occurred, "we must say that the country has been reducing for days the active cases that remain in income."

Meanwhile, the number of medical discharges has reached 85.4%, and in the last 12 days there has only been one death (on Wednesday).   This indicator of few deaths during several consecutive days, and the fact that the number of patients in critical and serious condition is minimal, indicate that the results of the application of therapeutic protocols are consolidated, together with Cuban science and biotechnology, and are contributing to this outcome.

Díaz-Canel also referred to the return to Cuba of the first group of collaborators of the Henry Reeve brigade, who saved lives in the northern Italian of Lombardy, a place of great complexity and where they travelled at a time when the situation on the island was becoming more complex.

Prime Minister Manuel Marrero Cruz said that Cuba will return to normal life in the country, gradually and asymmetrically.  He noted that the implementation of the sanitary measures will be accompanied by a health protocol.

The prime minister said that tourism will restart in the first phase only with the domestic market, that is Cuban living on the island.  The commercial flight ban continues, public transport is restored with limitations.

Prime Minister Manuel Marrero Cruz said that the measures included in the plan have been designed in three phases of a first stage.  They cover several areas, including health, tourism, labour and tax issues, foreign and domestic trade, transport, education, sport and culture.  In addition, activities are planned for the summer.