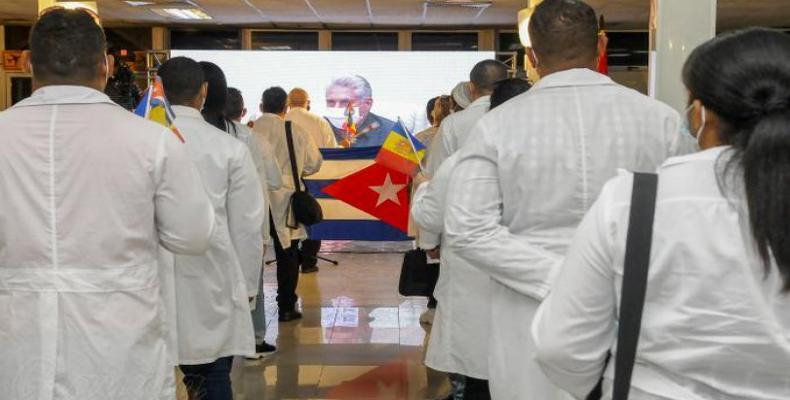 Havana, July 1 (RHC)-- The Cuban medical brigade that helped fight against the coronavirus pandemic in Andorra arrived back in Havana Wednesday evening.

Arriving in the Cuban capital at about 9:10 p.m., the plane that brought the health professionals back to the island touched down at Terminal 5 of Havana's José Martí International Airport.

At the terminal, they were welcomed home by Cuban President Miguel Diaz-Canel, who addressed them by way of a virtual, video-link.  He thanked them for their service to humanity and as representatives of the Cuban Revolution in Andorra.

The head of the medical brigade, Dr. Luis Enrique Pérez, highlighted the results achieved during the three months of work in the European country.  Pérez stressed that the 39 Cuban professionals contributed to breaking the curve of SARS-CoV-2 coronavirus infections and helped to improve the epidemiological indicators.   He reported the satisfaction of having offered 54,680 medical consultations to 8,223 patients and more than 66,480 nurses, and of having saved 106 lives over the past several months.