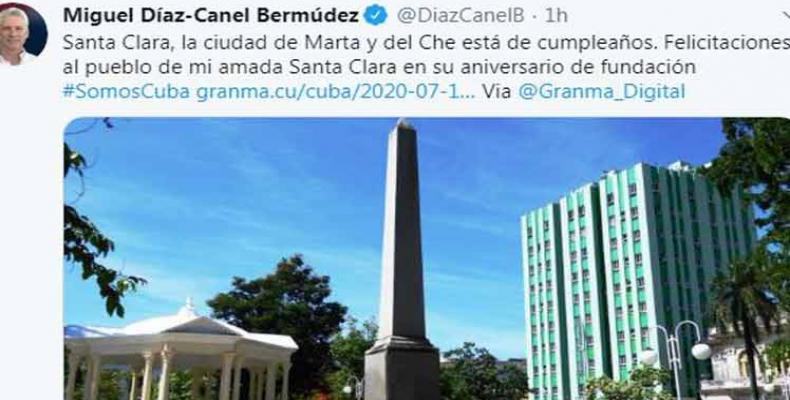 Havana, July 16 (RHC)-- Cuban President Miguel Díaz-Canel congratulated the city of Santa Clara, capital of the province of Villa Clara (downtown), on the 331st anniversary of its foundation, on July 15, 1689.

"Congratulations to the people of my beloved Santa Clara on its anniversary of foundation," the first president wrote in his Twitter account.

The central city was created by a group of families from the village of San Juan de los Remedios, who moved in search of fertile land for the development of livestock and agriculture.

July 15, 1689 is considered the date of creation, when the first mass was celebrated that day at the foot of a leafy tamarind tree, according to local tradition.

Due to its geographical location, the village then became the capital of the Villa Clara region and a vital hub of communications in the country, and was granted the title of city on 12 May 1867 by order of Queen Isabel II.

The city is also known as the city of Marta Abreu and Che, two people linked to its history and development.  In the case of Marta Abreu de Estévez -- "the Benefactor" -- she is recognized for her contribution to the construction of emblematic institutions of the town, such as the La Caridad theatre.

Meanwhile, Ernesto Che Guevara led the battle that liberated the city from the tyranny of Fulgencio Batista, in the final days of December 1958.  And the memorial where his remains and those of the members of his guerrilla group in Bolivia rest in Santa Clara.