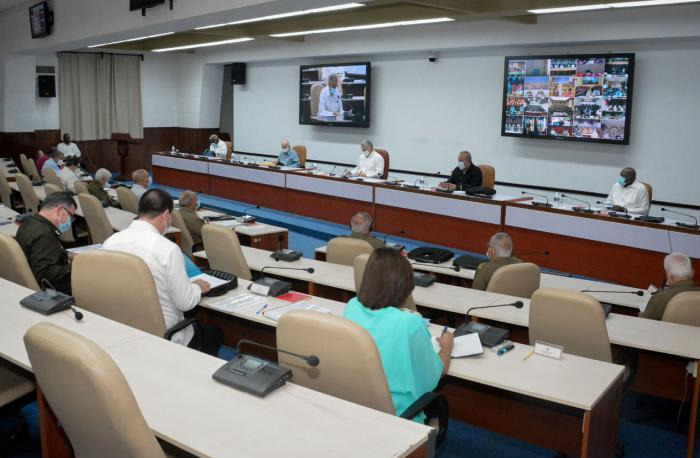 Havana, November 6 (RHC)-- The Council of Ministers approved Thursday five policies and programs as part of the economic and social strategy designed for the recovery of the nation amid the tense scenario imposed by the COVID-19 pandemic.

The policies of industrial development, insurance and reinsurance, and commercialization of agricultural products, as well as the hardware program for the reduction of water leaks, were part of that governmental agenda, which also included the approval of two draft laws on the organization and functioning of the provincial government of People's Power and the Council of Municipal Administration.

At the meeting - led by the President of the Republic, Miguel Díaz-Canel Bermúdez, and directed by the Prime Minister, Manuel Marrero Cruz - the National Program for the Advancement of Women was also presented and endorsed. It should become the cornerstone for the development of policies that benefit Cuban women.

Participants discussed the provincial outline for the territorial organization of Guantánamo, the status of due and payable accounts in litigation, and the report on the performance of the economy at the end of September.

The President of the Republic considered "we have to become from here, from the Council of Ministers, the promoters of all the work concepts that we have proposed to advance more, focused on the VIII Congress of the Party."

It is a matter; he said, "of producing, serving, diligently processing and integrally attending each problem and situation in the country, in the territories, especially those related to the problems of the population".

As defined by Army General Raúl Castro Ruz, the essential task is the economy, and within it, it is to promote everything related to the strategy, he indicated.

We are going to demand from all levels of management for its implementation and compliance. It is time, Díaz-Canel said, to "break the entrepreneurial inertia" and seek all creativity.

The work philosophy to achieve what we have set out to do, he reflected, has to be to facilitate progress in any area that is addressed.

That each person, from their own space, do things well, that is the challenge, said the Head of State.