Council of Ministers evaluates priority items on the national agenda 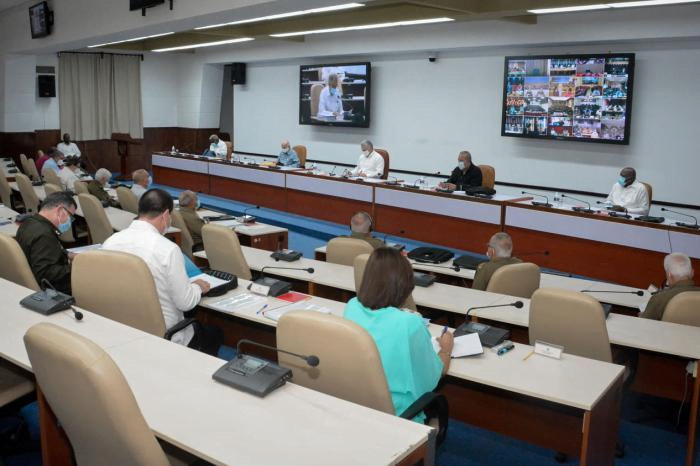 Council of Ministers of the Republic of Cuba met this week in Havana.

Havana, February 6 (RHC)-- Cuban President Miguel Diaz-Canel Bermúdez stressed the need to work with intelligence and that this is not the time to feel distressed or overwhelmed.

During a meeting of the Council of Ministers held on Friday, the President acknowledged existing complexities. Still, he stressed that for revolutionaries, they are an incentive to grow and overcome problems.

"As the Revolution has taught us in its history, with dedication, intelligence, and intense work, taking a little piece out of the big problems every day, without passivity, without delay, and with agility, we will move forward," he said.

Diaz Canel considered that, in essence, these complexities are found in the implementation of the Ordering Task, the confrontation with Covid-19, and food production.

The head of state urged for actions in the short term that lead to achieving stability in the monetary reform, allow the island to return to the new normality in the shortest possible time after the control of the Covid-19 epidemic; and efficiently unleash the production of food, from our efforts and resources.

He added that this requires adequate leadership on the part of the cadres, to continue stripping ourselves of bureaucracy, to show sensitivity to the population's problems, and for the business sector to be more proactive and innovative.

Referring to the inevitable adjustments in the Ordering Task's implementation, Diaz-Canel acknowledged that several entities did not prepare adequately for its start, which caused misunderstandings and dissatisfaction.

Things planned to be implemented in one way were done in another -he emphasized-, and he mentioned prices and tariffs that did not take into account the provisions of the norms that had been conceived.

Every time we implement something wrong, the President pointed out-, we generate misunderstandings and disagreements, we put brakes on ourselves since we have to spend time to rectify to move forward.