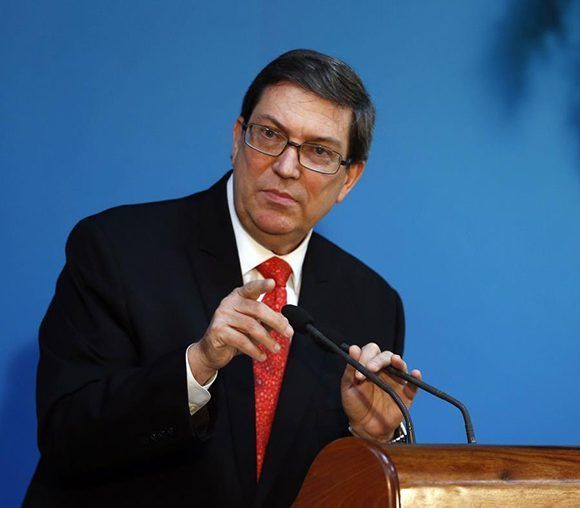 Havana, December 22 (RHC)--The Cuban Minister of Foreign Affairs, Bruno Rodríguez, denounced Monday the implementation of new measures by the U.S. government against Cuba, as part of the economic, commercial and financial blockade that Washington has been imposing on the people of the island for almost 60 years.

On Twitter, Rodriguez rejected the inclusion of three new Cuban entities in a list of the Office of Foreign Assets Control (OFAC), announced this Monday by the Secretary of State of the northern nation, Mike Pompeo.

The minister warned that his country will move forward no matter how many Cuban entities are included in the spurious lists drawn up by the United States.

Every new action in the U.S. foreign policy reinforces the international isolation and discredit Trump and his staff have plunged it into, he said.

OFAC blacklisted on Monday three Cuban entities and imposed sanctions on an equal number of Nicaraguan citizens, actions that Pompeo justified under the argument of ending economic practices that disproportionately benefit governments like Cuba and Nicaragua.

Official sources recently reported that the northern country's blockade against Cuba for the first time in six decades caused losses of more than five billion dollars in one year.

Between April 2019 and March 2020, this extraterritorial policy caused Cuba losses in the order of 5.57 billion dollars, representing an increase of about 1.226 billion dollars.

In recent months, the United States applied 17 measures to prevent Americans and Cubans living in that country from flying to Cuba, and President Trump closed the so-called people-to-people contacts, and prohibited tourist trips to the island, charter flights, cruises, private planes, and boats.

Even in the challenging context of the COVID-19, the Government of that country intensified the measures, so it is an act of economic war, said the Cuban Foreign Minister earlier this month in the report on the blockade's effects on Cuba.

According to official sources, the losses caused to Cuba by the blockade in health reached160 million 260 thousand 880 dollars, only in the period from April 2019 to March 2020.