A new worldwide caravan against the U.S. blockade of Cuba to take place over the weekend 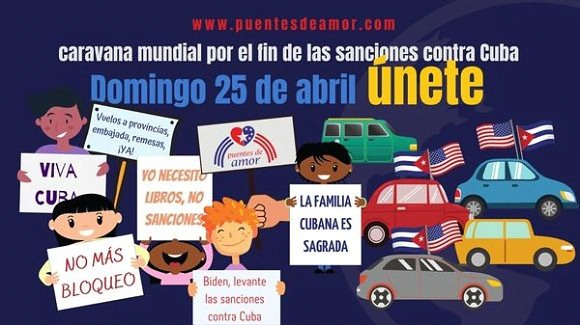 Havana, Apr 23 (RHC) Friends from different continents, solidarity movements with Cuba, Cubans living in other nations, honest citizens, and international forces that dream of a better world will participate this weekend in a new World Caravan against the U.S. blockade of the island.

Having as a precedent at the end of last March in more than 60 c0untries, this weekend, marchers will once again rain their voices throughout the world to demand the end of the blockade, a genocidal policy that has of more than six decades.

The Cuban Institute of Friendship with the Peoples (ICAP) is constantly receiving information and images of the preparations for this mega solidarity caravan, which originated in a similar initiative in Miami called Bridges of Love.

The U.S. initiative, launched by Cuban American  Carlos Lazo, has gained international strength in support of the Cuban people who are resisting the blockade and defending the sovereignty and dignity of their country.

They announced that emigrants and associations of Cubans living in different regions; organizations, and groups of the Solidarity Movement; parliamentarians; academics; artists; graduates in Cuba, and countless people of various ideologies and creeds who condemn the brutal blockade against a small country would join in.

In the United States, protesters will participate in more than 20 cities, among them Miami, New York, Washington, Detroit, Milwaukee, Chicago, Los Angeles, Sacramento, and Oakland, while in Canada, they will participate in Vancouver, Montreal, Winnipeg and other regions.

In Latin America and the Caribbean, events will be held in Mexico, El Salvador, and  Santo Domingo. Marches will also take place in Belize, Panama, Ecuador, Uruguay, and Argentina.

Numerous mobilizations have been called in Europe, such as in Brussels, Madrid, Barcelona, London, Birmingham, Manchester, and Glasgow, and a bike ride from Elephant and Castle to Lambeth Bridge in the United Kingdom. Actions will also take place in Russia, Italy, France,Serbia and Ireland.