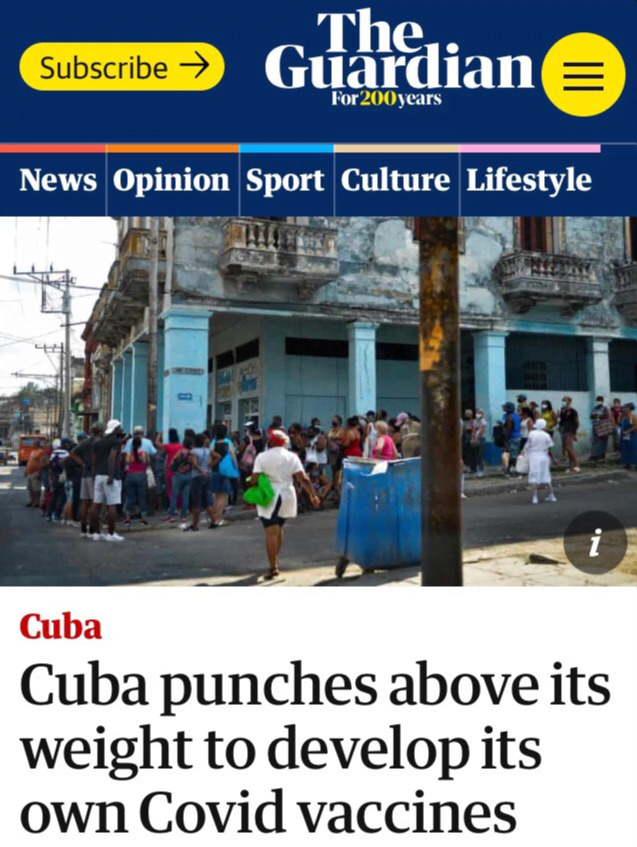 Havana, May 7 (RHC)-- The British newspaper The Guardian and the Canadian news network CBC News highlighted the progress made by Cuban anti-COVID-19 vaccine candidates, despite the limitations imposed by the U.S. economic, commercial and financial blockade against Cuba.

In an article entitled "Cuba fights above its weight to develop its vaccine against COVID", the British newspaper pointed out that of the 27 vaccine candidates against the SARS-COV-2 coronavirus in the final phase of international trials, two are Cuban.

The newspaper pointed out that the Caribbean nation, "besieged by the United States for 60 years, could become the smallest country in the world to have its vaccine".

Meanwhile, the Canadian network CBC News highlighted the production in Cuba of the Soberana and Mambisa vaccines against this pandemic, developed by the Finlay Institute and the Center for Genetic Engineering and Biotechnology, respectively.

The article cites the criteria of Helen Yaffe, a professor of economic and social history at the University of Glasgow, who studied the Cuban biopharmaceutical industry and who estimates that most countries take Cuba's biotechnological products very seriously', reports Prensa Latina news agency.

Yaffe added that one of the vaccines from the largest of the Antilles, Soberana 02, would surely be a candidate that could advance and be used in certain nations of the world, 'we'll have to see it.

Both media join the dozens of national publications that in recent weeks have echoed the advances of Cuban science and biotechnology in the face of the COVID-19 pandemic. This disease has already caused three million 249,649 deaths worldwide.