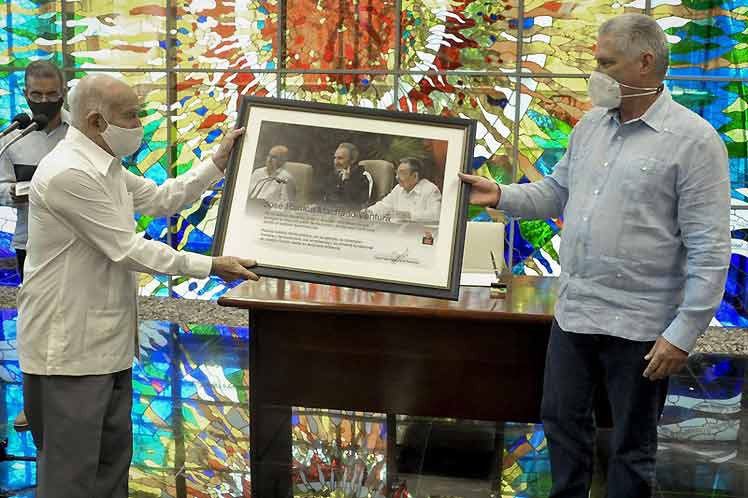 Havana, Jun 11 (RHC)-- The ceremony of handover of positions of the Secretariat members of the Central Committee of the Communist Party of Cuba (PCC) took place Friday in Havana, as a part of the follow-up of the 8th Congress of that political organization.

According to the Presidential website, the ceremony at the Palace of the Revolution paid special tribute to Rebel Army Commander José Ramón Machado Ventura.

During the activity, the first secretary of the PCC, Miguel Díaz-Canel, said that the process of handing over responsibilities took place without traumas, among comrades of outstanding commitment to the Revolution and with continuity in work.

Diaz-Canel also thanked the historic generation for the opportunity given to the younger ones to participate in the revolutionary process and expressed his conviction that everyone, 'from any scenario where they are present, will continue contributing.

For his part, Machado Ventura insisted on the importance of following the principles of socialism and responding to the proposals of the party congresses.

In this sense, he pointed out how what was approved in the 8th conclave regarding the transition of young people, the renewal of the Party, and continuity is ratified.

The new Secretariat of the Central Committee, elected in the party meeting of last April, is integrated by Roberto Morales, a member of the Political Bureau and responsible for Organization and Politics of Cadres, and José Ramón Monteagudo, head of the Agro-alimentary Department.

It is also formed by Félix Duarte, in charge of the Productive, Goods and Services sector, Rogelio Polanco, of the ideological area; Jorge Luis Broche, in charge of the Social Sector Attention; and Joel Queipo, head of the Economics Department.

At the meeting, Mercedes López, Olga Lidia Tapia, Jorge Cuevas, Omar Ruíz, Víctor Gaute and Abelardo Álvarez were acknowledged for their years of dedication to the PCC.